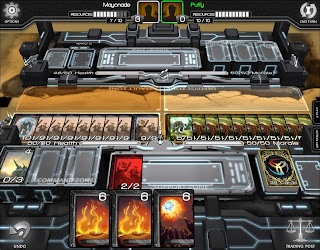 A month or so ago at the EB Games Expo in Sydney, one game really caught out attention, and it wasn’t from one of the triple-A developer or publishers; it was home-grown digital card game, Infinity Wars. Here was a PC game with real ambition, and as you can read in our impressions, we are very excited to see how this game goes as it works towards a full release.

It’s still plugging along, and we log in from time to time for a quick game. We recently sat down with a very busy Elphie Coyle, the Director of Lightmare Studios, to have a quick chat about what’s next for Infinity Wars, the challenges of being an Australian developer, and some of the opportunities he sees for the market moving forward.

Digitally Downloaded (DD): How has development on Infinity Wars progressed since the EB Expo?
Elphie Coyle (EC): Since the EB Expo we’ve been working on stabilising and polishing the game. We also have a new feature in the works, called “Rift Runs”, similar to what TCG players know as drafting.

DD: Are you concerned that the market for digital CCGs is quickly becoming saturated?
EC: Whilst I am slightly concerned about the market becoming saturated, but then the market is also currently in a place where developers are fighting over who will be the top dogs; they haven’t been established yet. In the video game industry, unless you have a truly revolutionary game, that’s pretty much the best situation you can hope for.

DD: You’re launching on PC first – why not tablets, given how popular those have been for CCGs?
EC: We’re launching on PC first because that’s the most direct platform to develop for. Developing directly for tablets would take a lot of additional time before we had something for people to play, and we want to get players involved and iterating on the game immediately.

DD: What inspired the development of Infinity Wars?
EC: A couple of things came together to inspire Infinity Wars. Ian Underwood (IW’s co-creator) and I have been long-time TCG players, and Ian has been reading game design articles around Magic: The Gathering ever since he first found them. I’ve been searching for years for a good mobile CCG and a revolutionary PC one, and once we got confirmation on timing from an industry friend, we realised it was exactly what we should be making. Once the idea of animated cards hit me like a brick, it was all go from there.

DD: Australia’s game development industry has gone though a lot of change in the past year or two. How have you found the developer community and business opportunities?
EC: The biggest development hurdles would have to be releasing for a live audience, and network management. With every game that we made before, we would keep it in the studio, working on it for in isolation and the public would never see it until it was done. With Infinity Wars, we wanted players to be playing the game as soon as we had a playable alpha. Keeping the game running, adapting to problems found on live as timely as possible, while still developing the game, has been tough to juggle. Also, we had very little experience making an entirely online game like Infinity Wars, which required us to hire expertise that we didn’t already have.

DD: What are some of the longer term plans that you have for the studio?
EC: I’d be hanged for mentioning too many of these, but let’s just say we have some bold plans with Infinity Wars and expanding its multiverse, and once we get IW fully established, the card genre on a broader scale.

DD: What advice would you give to a young developer looking to get into the industry?
EC: Create something now. It’s almost a must for anyone young to set themselves apart. Get it monetising, show that you don’t just make cool games, but you make games that can earn some profit for you and therefore a publisher or developer who could help scale it.

DD: Finally, what games are you playing at the moment?
EC: I still find time for a game or two of League of Legends, and for the first time ever, out of the few games I get to play nowadays, I’m proud to say that IW is the other game I play when I can. To build onto your question, what am I most wanting to play that isn’t available yet? That would be Heroes of the Storm, it looks set to actually rock the MOBA genre.

Hardware review: the Xbox One