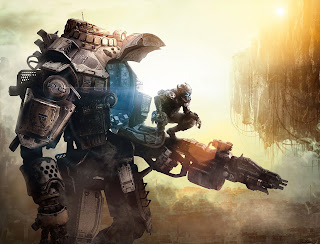 As one of the most anticipated new IPs that has ever graced the presence of Microsoft’s Xbox franchise, Titanfall represents that most precious (and rare) thing in first-person shooters – something that promises to offer something new and exciting.

And Microsoft knows it. The entire Xbox One marketing strategy relies on people knowing that this single game won a record amount of awards at E3; 60 at last count including 6 critics awards. As a game to be released in the launch window (although not a launch title), it will be an important pawn in the battle for next generation supremacy.

The game offers a few new gaming mechanics to the shooter genre, designed to ensure the battlefield has a monstrous and vertical component. It is best described as a combination of special land based troops, known as pilots, who duel as enhanced foot soldiers and as controllers of vastly mobile, giant, responsive heavily armoured mechanical soldiers. Whilst on foot, an extended jumping ability allows scaling of floors like never before, combined with new wall running abilities just to throw in a bit of visual flash. The traditional FPS requirements have been fulfilled too, as there is appears to be a remarkable level of differing weapons specialisation that should appeal to all skill sets. Five fairly traditional setups are represented with heavy weapons, new smart guns, snipers and all-round designs, amongst others, all available 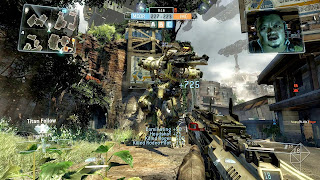 The mech troops, aptly named titans, provide a heavily armoured gigantic vehicle for control. For those uninitiated, these vehicles are reminiscent of the mechanical soldiers represented in Avatar. Remarkable in its power, these responsive, human-imitated machines provide an experience that can only be described as “pure, honest fun”. The feeling of strength that comes with controlling these destructive weapons is undeniably appealing, with the ability to exert mass influence over enhanced battles empowering. A mechanic that, from an early perspective (I lined up 2 times in hour-long lines to experience it again), is performed to a highly professional and polished level, it will in itself win over an veritable army of fans and will be enough to ensure it success in the competitive FPS world.

Level design in itself has been carefully constructed so as to make use, and highlight, the power of the enhanced gaming mechanics. There is a lot more to offer than what I got to experience in my three quick bursts of play, but on what has been experienced, the scope and slick interface combines to create an unparalleled experience.

Whilst having many attempts at the multiplayer doesn’t give any indication of the one player storyline, their appears enough to offer for many hours of gameplay. I for one, am looking forward to unlocking the many more experiences to come.