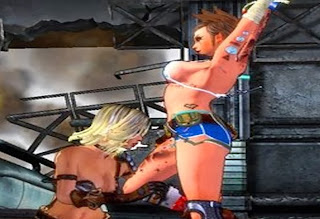 Exhibit A: Dead or Alive. A game that features rather lovely ladies (and men, but no one really pays any attention to them, do they?) wearing rather… lovely… costumes beating the living bejeebus out of one another.

Dead or Alive is a popular franchise. I get that. It sells well and I can certainly appreciate another developer looking at the success of Dead or Alive, figuring out that it’s the women that makes people buy this game over the likes of Street Fighter or Tekken, and deciding to build a game to capitalise on that popularity.

So enter exhibit B: Girl Fight. A game that features random ladies (and no men, removing the stuff from Dead or Alive that no one cared about) wearing random costumes and beating the living bejeebus out of one another.

Thing is, the developers behind Girl Fight clearly had a far smaller budget than the team that made Dead or Alive 5, and while the game might have been an earnest attempt at building a wholly new fighting game, it’s also one that largely fails.

(A direct comparison between Girl Fight and Dead Or Alive 5. Courtesy of DDNet TV)

To start with the game’s most obvious asset; the women. Despite a rather raunchy logo, in-game the characters lack any measurable personality or character. Random bits of poorly-written “bios” are available as unlockables and are the game’s only attempt to give players a backstory to any of the action going on. In the battles themselves the characters all fight using made-up combat styles, which is neither engaging nor inspiring.

Say what you like about Dead or Alive, but at least the characters have a sense of humour and the story mode is silly, but achieves its purpose in giving each character a personality. Then, the fact that each fighter uses a real-world martial art helps define them further; in the end you’re going to end up with your favourite fighter in Dead or Alive, even if they’re not the strongest, from a competition point of view.

With Girl Fight, after a couple of hours, I still hadn’t found a preferred character. And I just didn’t care. 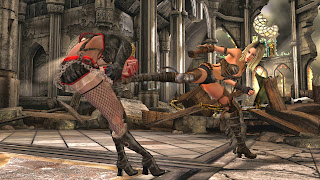 This would be forgivable if the fighting itself was solid, in theory. I’ve never encountered a fighting game that I’ve enjoyed without also having favourite characters, but in theory the fighting itself is more important. Unfortunately Girl Fight is too much of a button masher and the combo system is clunky and unrefined.

I’m not sure how closely the developers did want to emulate Dead or Alive, but it feels like the idea was to share the same counter-punch style to it. Timing the block button at the right time launches a powerful counter attack, and attack combos are designed to be short, sharp and punishing to people who try to button mash their way through the combat. Unfortunately the counter is a little too sluggish to execute, and precision moves in general are sluggish. Throwing in random combinations of high, mid, and low attacks is enough to get through most bouts, so Girl Fight ends up being a button masher’s paradise.

Another earnest attempt by the developers to throw some more depth in there is the power-up system. Before each bout players get to select two powers which they can use in combat once they’ve built up a power bar by attacking. These have a range of offensive and defensive effects, but they don’t add much to the game; players still simply button mash before activating a power at random and mashing some more. The intent was to add some tactical depth to the overall game, but it didn’t really work. 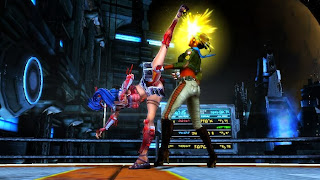 It might simply be that I haven’t quite figured out how the nuances of the combat system works, or that I’m so used to Dead or Alive by now that it’s hard to adapt to a different combat system. I tried to jump online and see how other people are playing, but despite a fairly neat setup where people can “bet” their in-game points on the outcomes of an online fight, I never managed to get a game going. Looks like this game’s online community, if it ever existed, won’t last long. I guess that’s the downside to releasing a game in a massively overcrowded market filled with very committed and loyal fans.

The offline play modes for single player are pretty thin. The story mode is the arcade mode and there’s the standard 2-player vs. mode. The story mode goes from being a cakewalk for the standard enemies to being a Mortal Kombat-like final boss difficult spike that was so sharp that I just couldn’t beat her, ever.

Everything else about the game is distinctly average. While I can certainly admire what they’ve trying to do here, and credit must go to a small team on a small budget for creating something that’s not outright bad, Girl Fight just can’t compete with its clear inspiration, and as such, unless you’re a fighting games tragic that just has to play everything, steer well clear of this game.