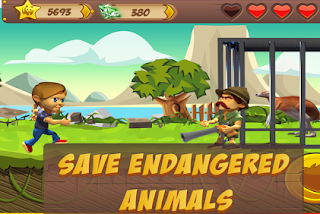 When a game is created with a great cause like Animal Dungeon: Call For Rescue, which was made in conjunction with the World Wildlife Federation, there should be great praise for the collaboration. Anything that creates awareness about wildlife preservation and endangered species deserves to be noticed. If only the game that was beneath that noble concept was worth playing. As hard as I tried to find something positive to talk about, there is almost nothing but the WWF link that makes this game redeemable in any way.

The concept of the game is fairly strong in that you have to save animals from poachers who are trying to collect as many animals as they possibly can. In a running game, this should work pretty well and in execution you rescue animals from all over the world, while learning facts about them – handy for the kids that can’t get out to the zoo. These facts are the in-game rewards, and clearly, they thought about the prizes for completing the game much more than the gameplay because as a lover of running games, this is horrible to play. 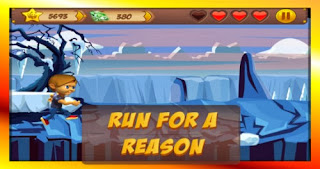 Firstly, the graphics are woeful. As you run along, you have to duck and jump objects as well as hit poachers with apples to release animals. The controls are simple which is good but within two minutes, I was bored out of my brains. The running mechanic is so laborious; it just isn’t an enjoyable use of time. With so many other great runners on the market, there is only one reason to buy this game and it has nothing to do with the actual gameplay.

Making a game to try and relate to a new generation of gamers via apps and turn them into animal activists is a big idea. It’s an idea that I hope many other game developers take on. And it has been done really well in the past – a title like Ecolibrium manages to be both educational and engaging at the same time in teaching players about how ecosystems grow and operate. Presenting games with a greater social awareness is brilliant. The entire industry should get behind it. Animal Dungeon on the other hand is more a slapped together game with the hope that it will inspire people to talk about the issue. Without a strong game, it just seems fruitless. Why would you bother caring about the issue they are pushing if they don’t care about giving you a solid game? 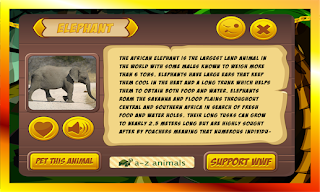 Overall I might be a bit harsh. But the runner game in apps is already a classic and oversaturated style of game. There are so many great running games already that a sub-standard game is really not going to cut it. Look at games like Monster Dash, or Ski Safari or even the juggernaut that is Temple Run. These are great games with increasing difficulty and great reward that you can use to upgrade your character. They give you a sense of wanting to beat the game that Animal Dungeon just doesn’t have.

Ultimately, there is not much to like about this game. It might be somewhat educational, but because players (especially young players) will get bored of it, its intended purpose is going to get lost. For a game with a cause so important, it deserves a much better game with much better execution.

Now that I am done with the review, I can delete the app – and my iPhone and iPad will be much better for it.

Vroom Vroom; hands on with Forza 5 (Xbox One)