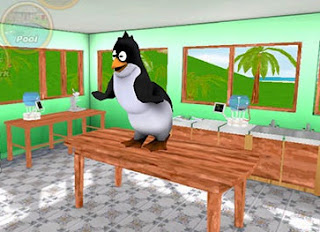 I’m not exactly a generous gamer these days. After years of playing unexpectedly disappointing games and surprisingly good ones, I’ve given up caring about games that try to coast by while not offering much in return. 101 Penguin Pets 3D is a game that I knew from the start could only get worse. I quickly gave up on this one and started a petition for grass growing to be a sport.

Imagine a simulation game on limited hardware with limited imagination and inspiration in an unappealing setting with disorienting “characters”. 101 Penguin Pets 3D is exactly that mess of an idea. After selecting one of the penguin pets to take care from beginning to end, the player is given the task of keeping the animal satisfied. This means you’re practically its parent. Feeding it, bathing it, getting it to sleep at night, potty training, and making sure it receives medical attention when in need are your main priorities as a penguin parent.

Utilising the touch screen, all of these statistics of the penguin are managed by completing mini games. Fail and penguin kid is in trouble. Physically. Feeding requires using the stylus to swipe food that appears on the bottom screen. Swipe three bombs by accident and the penguin will receive critical damage to its health. Bathing requires scrubbing the flightless bird until it’s squeaky, while sleeping requires using the gyro controls to lull the penguin to sleep. 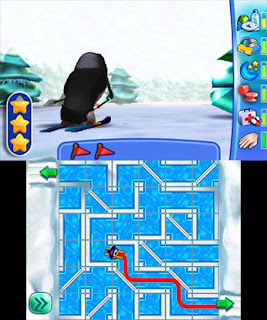 The other (and only other), gameplay features are the minigame activities. I’m not kidding when I say these activities are bottom of the bucket material. Uninspired mini games that offer no significant purpose nor reward. Skiing, for instance, is the only mini game that seemed to have any thought put in, but controlling the path of the speeding penguin with the stylus is a hassle to say the least. Tilting the walls and obtaining the flags while passing through an exit is an unnecessarily frustrating task. Puzzles, Where’s Wally clones, and racing are alternatives to this skiing minigame, but not very good ones.

The costume shop is, as expected, as cliche as the thousands of other games that feature it. As surprised as you may be, after finishing minigames you’re rewarded with currency that allows you to buy costumes and accessories for your penguin to wear. Is there any point to this you may ask? No, because the character design and environments are so unattractive that it’s difficult to want to play dress up in a beta of a Sega Saturn game.

101 Penguin Pets 3D is a terribly limited game. From the outdated graphics to the very foundation of the gameplay, I struggle to think of a game I’ve been less engaged with. Slip and slide on your bellies away from this one, people.