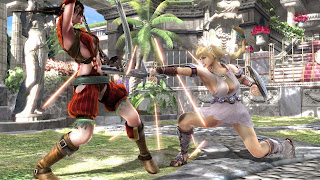 So, you remember when I argued that the fighting game genre was one ripe for the freemium model? That being able to buy individual characters could work much like people are happy to buy individual characters in a game like League of Legends and in fact this was good for the fans because it encourages developers to continue to expand on the game release by releasing new characters without creating yet another full-priced game?

Well, looks like the fighting game publishers out there are thinking down the same lines. Killer Instinct is going free-to-play, Dead or Alive 5 Ultimate is optionally free-to-play in Japan. Tekken is another one and now Namco Bandai has announced that a free-to-play Soulcalibur is on the way.

Soulcalibur: Lost Souls is, interestingly enough, not going to be monetised through characters, but items (if the Gamasutra piece is to be believed). Does this mean that there will be a range of weapons to enhance or change up stats? Probably. Does this mean premium-priced bikini DLC? Undoubtedly, given that Soulcalibur is only bested by Dead or Alive for sheer, brash exploitation of the female characters.

And hey, I might as well admit this stuff works; I must have spent three times the cost of Dead or Alive 5 on its costumes. The Santas are my favourites.

But regardless, this is going to be a game to watch, I feel. Free-to-play fighting games still need to prove themselves, but it’s a tantalising proposition for those more casual fans that are happy with one or two characters as a way of passing a boozy evening of gaming.