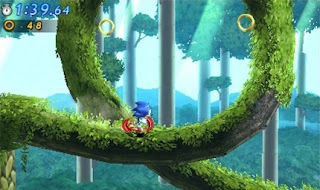 Sonic Generations on home consoles far exceeded the standards of the average anniversary game. Ironing out the kinks of Sega’s past efforts such as Sonic Unleashed and Sonic Colours, the game seamlessly rotated between 2D and 3D mechanics and transcended what could have been a cash-in nostalgia gimmick. Backed up by gorgeous visuals and one of the finest soundtracks in the entire franchise, it’s no wonder fans see the once-troubled hedgehog as on the rise.
If the 3DS version had taken its place though, it’s a realistic assumption that Sonic’s stock would not be as high. Some of the success of the console release rested in the concept of swapping between two wildly different approaches to platforming – boost-heavy 3D Sonic and platforming-intensive 2D Sonic. Right off the bat, this is where the handheld version of Generations drops the ball.
Since both modern and classic stages are confined to 2D planes in this iteration, it would be logical to distinguish the play styles as much as possible. For whatever reason though, it was deemed essential for classic Sonic to acquire a mandatory homing attack part-way through his adventure – an ability used exclusively in past games by modern Sonic. This is not even discourteous to the speedster’s lineage so much as just redundant.
Though it is technically feasible to ignore the attack outright, getting faster times, achieving higher scores, and exploring alternate routes are all linked to the use of this attack. The resemblance between the styles serves only to muddy the line between what should be two dissimilar experiences. The quality of the original Sonic’s gameplay is also not up to par with most of the past 2D games, startlingly causing his experience to seem watered down. The slower platforming portions tend to be agonizingly so and lack the flow evidenced in any of the Mega Drive games. 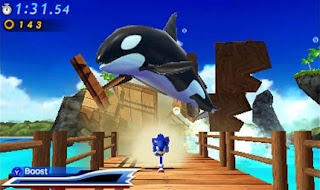 If the developers were set on going this route, perhaps it would have been more appropriate to just mesh both gameplay styles together and pay homage to Sonic’s handheld history. It might not have had the same attraction for former fans but would have at least offered consistency.
To its credit, developer Dimps sought to make the 3DS edition distinguishable from the console release by altering the stage and boss selections. It even went one step further by reviving the special stages absent from the console game (albeit in an undesirable format). This should encourage series aficionados to pick up both titles, but it’s ultimately questionable whether fans will want to tarnish their memories with the vastly inferior level design on offer here.
Dimps has proven itself capable of producing solid 2D platformers as evidenced by the Sonic Advance and Sonic Rush lines, but it feels as if the studio was pressed for time with this instalment. A couple of levels almost seem as if they were hastily stripped from the previous games, which does seem a tad fishy considering the talent of the studio (not to mention the theme of reimagining Sonic’s past glories rather than compiling them). Others feature bizarre design choices such as pathways that lead to nowhere, choppy transition sequences, and questionable physics.
Still, when Generations hits its stride, it becomes apparent why the speedster has captivated so many and remained relevant in spite of his chequered past. The momentum-based classic Sonic has a couple of levels that showcase his minimalism competently and his future self often avoids relying on his exploitable boost ability. The stellar soundtrack and striking 3D effects are here in full force as well. If most stages didn’t have rough patches, the gameplay resemblance between the hogs would actually be forgivable.
This version of Generations does manage to outdo its console counterpart with a superior mission mode, although saying that is damning it with faint praise. Rather than being shoehorned into the main quest, these challenges are simultaneously more engaging and voluminous. Their problems lie now in the implementation; someone decided the majority should have to be unlocked using five of the 3DS play coins each. Even if you have 300 play coins hoarded away, Generations will guzzle them all and more in your endeavour to access the bulk of the game’s content. It’s no doubt intended to keep the player returning to the game time and time again, but one has to wonder whether players will care about the game long enough. 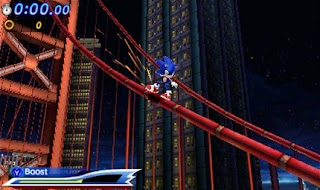 It’s possible the limitation was imposed because the majority of Generations is heavily padded; fourteen short levels are inflated by excessive special stages, boss fights, and rival bouts. There are also additional modes such as online multiplayer but none are notably polished. Most great platformers are replayable ones and can justify retail price without excess material, but very little of the content here – main stages included – is appealing enough to warrant a return trip.
Sonic Generations offers legitimately captivating entertainment at times, but shoddy execution prevents it from competing with the myriad of excellent platformers on the eShop. It’s also so short-lived that with the hefty price tag you are better off gambling on the upcoming 3DS version of Sonic Lost World.

Game Atelier’s Tiny Death is alive on the iOS Marketplace