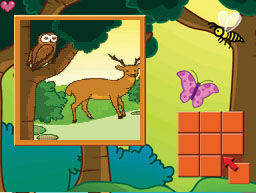 Sometimes games have a target audience in mind, and that audience is the only one who will ‘get it’. Enjoy Gaming is gearing this title and others from its Tales to Enjoy! series toward younger children. This is evident as soon as you start the game up, and that is not a bad thing – it is just that the appeal to those outside of that target bracket (think around six years old give or take a couple of years) might not find much to hold their interest.

Little Red Riding Hood tells the familiar tale, and it actually does it pretty well. That is the first mode you are likely to use – the story one. This walks the player through a storybook-like retelling of the classic tale, offering images, text and voice acting. For the most part this is enjoyable and straightforward. There are other options you can access from the main menu as well – most of which are games (matching, puzzle pieces and looking at two images and trying to pick out what is different are the more notable items).

There are a few other modes as well, including a colouring book and ‘create your own story’. Basically this is the same kind of stuff you might find on a Leapster or online colouring/activity book, but in digital form. The file sizes are small and the puzzles are actually pretty well-handled as they do generally gently escalate in difficulty as you complete more and more of them. 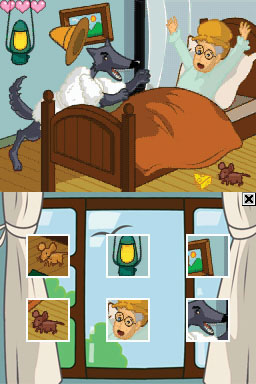 There are a couple of small issues I have with the game, however. The first is that the touch controls seem just a bit finicky at times. I played through them all, and then I let my youngest daughter play through them all (she is eleven, so older than the target demographic, but she was a good sport about it). There were times both she and I felt like the touch controls were a bit off, like clicking on things required multiple taps. That could be chalked up to the system as well, but my 3DS is pretty well cared for and I do not see similar issues with other titles. It is not bad enough to make a big deal of, but it does occur now and then.

The second concern is that there is a lack of direction in the games. I was able to figure out what the goal of each game was and how to play, but I question whether a four or five your old would without a demonstration or some sort of quick explanation or tutorial. The puzzle slider title is pretty self-explanatory, but what your objective is with the what’s different or one of the matching games is a bit uncertain right at first. 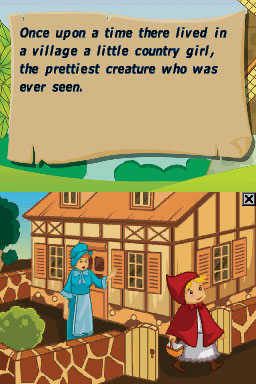 The tell your own story bit also feels like a slightly missed opportunity. Basically it goes through the story – but with no text or audio, and allows you to click on things with your stylus. The DS then says what the targeted item is. I think the idea is you might be telling the story and make note of the mouse on the floor, but instead of verbalizing the word ‘mouse’, you might say: and then a (click the mouse) walked by.

It might have been interesting if that mode had some way of recording what is pressed or even had a Madlibs type mode where they tell the story and you pick the item on the screen to fill in the blank it leads up to – something like that. Still, this mode more than any other reminded me of the Leapster my youngest daughter had about six years ago, and that’s not necessarily a bad thing since kids tend to be engaged by these forms of edutainment.

All in all, if you have a small child who is interested in stories like this and has a DS at their disposal, they may enjoy this for a time. A bit more clarity in the directions and variety in the activities would have helped, however. Certainly not a bad title, but it could have been even better with a little more time and effort.