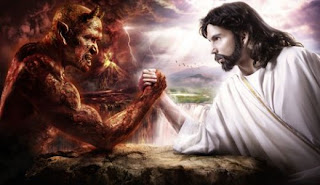 Another game making the jump from WiiWare to iOS, Gods Vs. Humans takes the tower defense genre and literally turns it on its head. You play as one of 20 Gods from five different eras and are trying to destroy the tower that your people are building towards you. Tower offence.

The first few tutorials make a decent attempt to explain the gameplay mechanics but even after completing them I still was incredibly confused as to how it all worked. You have a number of powers, some which can be used to destroy the pillars in the towers and others that are used to please your human worshipers. The power gauge, which allows you to destroy the tower your worshipers are building towards you, is filled by the happiness of the humans building the tower to you. If you hit them while you’re trying to destroy one of four pillars then they will get angry and stop worshiping you. It’s an interesting mechanic, but it falls flat as there are very few ways to consciously avoid hitting them due to their erratic behaviour. When you start attacking a level the humans will swarm to defend it, seemingly repairing it faster than you can destroy it. It’s much easier to try and destroy everything as fast as you can rendering this “happiness is power” mechanic rather useless. 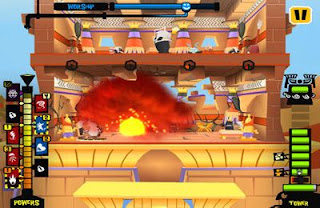 You can tell that the developer has worked hard to try and balance the game so players don’t get to cruise through hapless AI. In the early levels, the humans pose little threat and in destroying a few levels you have managed to destroy the whole tower. In an interesting gameplay mechanic, if you destroy a low level of a high rise tower, the impact of all the other levels falling down will strain the tower’s health overall, making it easier for you to win.

Then, when you get to the later levels, the towers are too high, the humans are relentless in their efforts to get to you. It becomes a case of incredibly unfair odds. Some may like the challenge offered, but the way the game handle’s difficulty is artificial and doesn’t make the game enjoyable for pick-up-and-play bursts, which is essential for iPad games.

The jump to the iPad doesn’t do the game justice in other ways either. On paper it seems like the perfect fit for the iPad screen, but the controls are very clunky and at times unresponsive. The visuals are far from impressive as well. Interested in how it held up on WiiWare, as I had never played it until I picked it up on the iPad, I had a look on YouTube and through my eyes, the game looks far better on a low quality Wii video than it does on the iPad.

I just get an overwhelming sense of laziness when I look at Gods Vs. Humans. It’s a three-year-old WiiWare game that has already been released on the PC. I understand that some developers want to get their games out there, and there is no denying that tablets are a great way to do so. But if little to no effort is going to be made to let alone adjust to the change of platform, let alone improve the enjoyment the game provides, there are many more games that started on the WiiWare service that can be recommended instead.