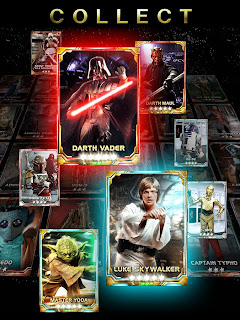 Having grown up a huge fan of all things Star Wars, I have played most of the related video games over the years. I am also one of the biggest collectible card game (CCG) players here at Digitally Downloaded, with everything from PC games such as Magic: The Gathering to mobile ones like Shadow Era under my belt. The combination of Star Wars with CCG elements immediately appealed to me.

Having spent a fair amount of time playing Star Wars: Force Collection now, I think it compares most closely to some of the popular Mobage titles like Rage of Bahamut. In fact, if not for the splash screen stating that it is a Konami game when you fire the application up, I would have thought it part of the Mobage family of games.

Many familiar elements jumped out at me as I began to play Star Wars. First, you have an endurance/ stamina total. You tap the screen during ‘quest’ portions to shoot enemies down, using up endurance while earning experience points. Once you are out of endurance points, you have to wait for them to recharge or spend crystals to restore them. Not only do you earn experience points doing this, but you gain credits and may possibly gain blueprints as well. At certain intervals you may encounter boss battles where you have to participate timing/screen tapping mini-game, or use your formation of soldiers to battle the computer’s army.

There are also battles you can participate in. You can pick enemies based on blueprint pieces you want, or search for ones around your pvp rank or your character level. You get ten of these at any given time, and again participation burns off the points which recover over time.

If you happen to level up along the way, both of the above stamina meters replenish. Credits can be used to purchase vehicles (once you have the necessary blueprint pieces assembled to create them), and can be used to level up your cards as well (increasing their attack and defence). You can combine two of the same card to create an upgraded version of that card as well. 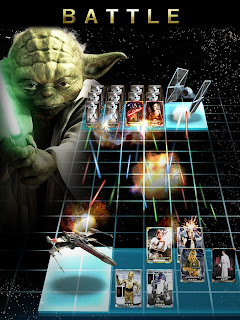 Star Wars: Force Collection is a free to play title, but the hope is you will enjoy it enough to make in-game purchases. You can earn crystals, but it takes a long time to do so. Crystals are a sort of currency that do a little of everything (reminding me a bit of the magic stones in Puzzle & Dragons) – restore your stamina, level up your cards and purchase packs. Purchasing higher end packs is your best bet for assembling a good army, and this is really where the collectable part of the game kicks in. You can make allies, which gives you points you can spend on lesser packs, and there are plenty of goals in the game you can meet which give you credits, allied points and even free packs of cards. There are promotions as well for inviting friends to play and promoting the game to others.

All of this probably sounds very familiar to fans of titles like Rage of Bahamut, and with good reason as the mechanics are almost identical. I will give Star Wars credit – the visuals are a lot better overall. There is a lot of movement on the screen and it is fun seeing iconic characters from all six episodes. Your actions will also help to determine if you are considered dark or light side of the force, which plays a factor in things such as player vs player battles.

The one area that Star Wars does stand out quite a bit from the familiar Mobage games is the combat, which as a few nice wrinkles in it. In games like Rage of the Bahamut, your cards basically add up their attack vs your opponent’s defence (or the other way around) and then apply some effects that may change those numbers a bit, and then it is simple mathematics to see which number is bigger.

Star Wars has those elements as well, but it has many more effects and also sprinkles in a bit of strategy as you have to set formations and work with units that have short, medium and long ranged attacks. For example short ranged warriors tend to fare better when the lines meet, while ranged attacks tend to work best with units in front of them. The two teams start at opposite sides of the map and draw closer steadily. As that happens, ranged attackers have an advantage because they are getting shots in before the units actually collide. I had a lot of fun trying to figure out my early teams, putting Han and Chewbacca next to one another for a bonus, with they and Leia as shooters behind the rancor monster and wampa leading the charge at the front of my line. 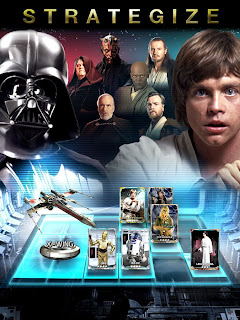 I enjoyed the game quite a bit, but luck is a huge factor fuelled by the random cards you draw – and Star Wars: Force Collection is counting on that. I actually got off to a pretty bad start. Early on you get a chance at a really rare card – but I pulled a four star and had a couple of three stars. When I first started to play this, there were not a lot of players out there, and most of the ones I encountered had at least one, if not multiple five and four star cards, and they generally mopped up the floor with me. At level twelve, I lost to a level three because they had multiple four and five star cards with lots of credits dumped into them.

Still, as more players began to play the game, I found more opportunities to participate without feeling completely overwhelmed, and I never spent a dime on the microtransactions. There are plenty of things you can do to help your cause, like logging in daily (which usually yields some sort of reward) and just spending a few minutes several times a day running through some quests and burning up your stamina points (which do regenerate much more quickly than most games of this nature).