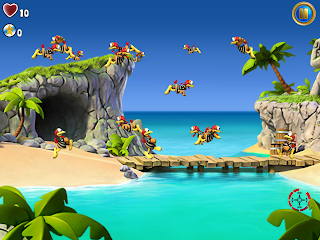 The Crazy Chicken series (or Moorhuhn as it is known elsewhere) is one that lends itself perfectly to the iPad given its sheer popularity and success amongst casual gamers. A shooting gallery game seems even more appropriate given the iPad’s screen size and touch screen input. Sure enough, Crazy Chicken Pirates works competently on iOS, but it’s hard to overlook the repetitive nature of the game.
Crazy Chicken Pirates has you taking up arms against a barrage of such foes as cannon-operating and scimitar-wielding fowl in your effort to rack up a high score. The control scheme is natural enough to master within seconds, requiring a mere tap to gun down poultry and a sliding motion to pan the camera left or right.
The presentation also has a certain degree of polish that plays a role in captivating the player’s attention. The backgrounds and character designs, while perhaps borrowing too heavily from overused pirate tropes for my tastes, should be reasonably appealing to the younger crowd or those with less jaded eyes. So far, so good.
Both Classic and Arcade mode are intended for brief periods of play. The design reflects this as well – tight time limits of 90 seconds and 60 seconds respectively are enforced. Unfortunately, there’s only one map in the game and everything except the spawning of chickens seems to be predetermined. Thus, the happenings in every round are virtually the same. It gradually becomes less of a “game” and more of a mathematical calculation of which items should be collected and how many of the randomized birds should be shot to maximize efficiency. 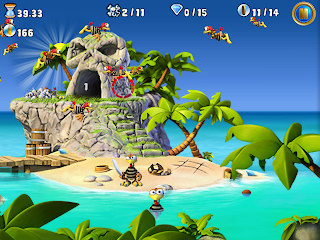 There is still some strategy to be found in that approach, but limited seconds mean the experience becomes stale and less competitive at a point. Though it is technically achievable to increase that limit in arcade mode, the challenge in doing so is markedly high and the best of runs will still be short-lived affairs.
One noticeable issue for newcomers is that countless targets – mobile or inanimate, chicken or not – can be shot for points. While that should theoretically enable diversity, the game often does a dubious job of conveying which ones are eligible and some objects need to be hit in seemingly arbitrary weak points.
Between items that give shoddy points and one masterful chicken that can deflect bullets to the point of emptying entire gun barrels, it seems replaying and memorizing is the core of Crazy Chicken Pirates. At a certain point you’ll no longer have to decipher the minor details, but considering both arcade and classic deal with time restrictions, the vagueness might actually dissuade the player from experimenting in environments where every second is crucial. This is masked somewhat by the range of achievements, which encourage you to take different courses of action, but it’s more of a band-aid solution.
Defense mode offers something more up my alley thanks to the lack of a time limit. Rather than go for a traditional Defend Your Castle-esque approach where various legions storm your base from one direction, the player is penalized when just one chicken from either side gets across. The high demand for a methodical play style becomes apparent out of the gate as hordes of chickens will barrage you from both sides. 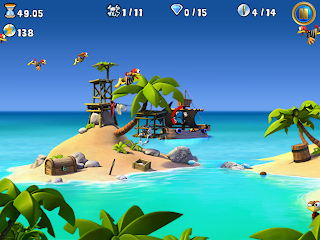 Even with the iPad’s large screen, it can get quite chaotic keeping on top of things when there are numerous chickens in the background and foreground, running across the bridge, soaring through the air, and paddling across the sea at different speeds simultaneously. You can go from having 10 hearts to 3 in just a few seconds despite a valiant and consistent effort. Even so, the challenge largely feels legitimate and the game may be oddly be worth investing in for the tertiary mode rather than the main course.
Crazy Chicken Pirates offers solid shooting gallery action, but I can’t shake the feeling a few extra levels or greater randomization would have been preferable to multiple modes. Should an update or DLC never show, I suspect the charm may still satisfy on a very surface level.