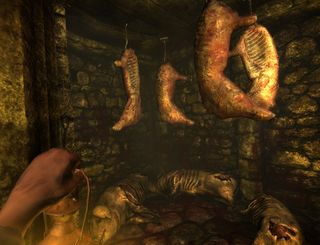 While I cannot judge any of the claims, many individuals criticised Dear Esther for taking away all meaningful player interaction and replacing it with story and meticulously crafted environments, with many coming to the conclusion that Dear Esther was primarily a set of pretty dioramas rather than a video game (we rather loved it at Digitally Downloaded though). When many heard the news that The Chinese Room was developing A Machine For Pigs, they thought that The Chinese Room’s freshman debut was not indicative of the developers future and that the developer would lend their knack for environmental detail to Frictional Games’ top-notch horror gameplay.

The critics of Dear Esther are going to have a field day over Amnesia: A Machine For Pigs. 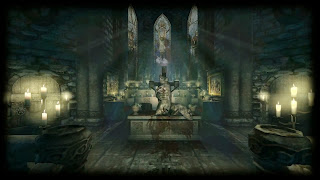 The first noticeable offense The Chinese Room performs is that it cuts down on the openness of the game environments. While the original Amnesia: The Dark Descent was linear in the accomplishment of goals, the game was structured around hub areas which allowed exploration of secondary areas and acquisition of items that were, at the time, unneeded. In other words, players felt like they could explore. In A Machine For Pigs, environments are linear to the point of being comparable to that of a heavily scripted first-person shooter. There are some larger areas, but they never come close to some of the later areas of the first game, neither in complexity nor scale. While it is slightly understandable why The Chinese Room did not create truly expansive areas (within the majority of the setting it would not make sense), the sheer linearity of the present environments seems like bad design rather than enacting restraint to enrich the setting. 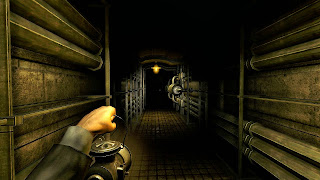 The second major strike against The Chinese Room is the writing. The Dark Descent was by no means bereft of text; individual documents within the game could contain several pages of text. But there was some restraint there in terms of how much reading people needed to do, and a major difference between A Dark Descent and A Machine For Pigs is the amount and type of the writing. Whereas A Dark Descent was mostly content with telling its story through documents and audio-only flashbacks, A Machine For Pigs incorporates those two elements along with in-game conversations, late 1800s-styled audio logs, and a re-purposed journal. These scattered storytelling elements, along with their surprisingly frequent use, makes the game feel a little too bloated in narrative. What does not help is that the writing doesn’t quite compare to the quality of A Dark Descent. The first game was a confident work of storytelling and happy to let people dwell on what they had just read, whereas A Machine For Pigs does not want to let the player think for too long before throwing them another bit of the story. 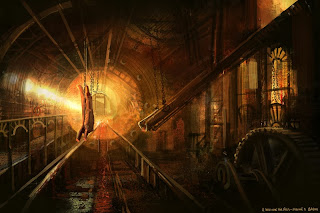 But enough about the comparisons; as a standalone horror game, Amnesia: A Machine For Pigs is vastly underwhelming. The biggest flaw with A Machine For Pigs is the lack of, well, horror. Taken out of the Amnesia formula are the tinderbox, lamp oil, inventory, sanity, and hiding mechanics. Now, this is not necessarily a bad design decision, but The Chinese Room does not justify these removals nor do they replace them. All of the very few monster encounters within the game end up with either the player running or turning off their lamp, as the monster AI is extremely simple. The last few of those encounters end up with the player killing said monsters, and given that this franchise relies on the idea that the player is powerless against the horrors, the actual horror atmosphere is ruined with the very first kill. This leaves the puzzles, which are very simplified because of the games linear nature and lack of an inventory. Now, all of this is completely functional and I had no problem with the overall execution of what mechanics are in the game, but I expected more from a modern horror game, to be honest. This is almost like the developers played Resident Evil 6 and thought the rules about what is and isn’t scary has been changed overnight. 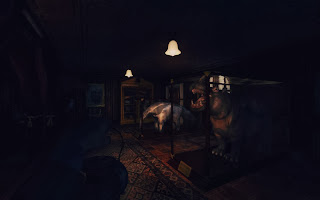 If The Chinese Room did anything right, it is undoubtedly the environmental design. Taking place in the very late 1800s of London, the game has large variety of environments revolving around early metropolitan design and machinery, most of which is detail-complete and marvelous to look at. It is clear that The Chinese Room took its time crafting the environments and adding small touches that may go unnoticed to the casual observer. The sound design is also very well done, although not quite to the level of the environments. Baring the acceptable to annoying voice actors, ambiance and semi-orchestral pieces pervade the experience, leaving a mostly tense atmosphere in their wake.

Unfortunately, environmental and sound design do not make up for the issues that are present within Amnesia: A Machine For Pigs. Intense linearity, bloated writing, and oversimplified horror gameplay really do not make the game worth playing for any but the most committed horror fans. In the end, A Machine For Pigs feels like a vehicle for storytelling rather than giving players a game, and that is a complaint eerily similar to what is often leveled at Dear Esther.