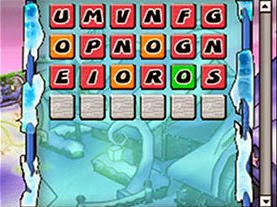 Letter Challenge is a straightforward edutainment game for the Nintendo’s DSi service that anyone can enjoy. The simplistic layout and limited content is perfect for players of all ages who want to kill some time and test their spelling skills. Right off the bat I’m going to tell you that it’s perfect for young kids and aging parents as it’s addicting and accessible for the less serious gamers out there.

After creating a profile, four game modes are offered. Word Finder is a little tricky as you’re given all twenty six letters of the alphabet to guess the randomly generated word in a designated amount of time. This can be challenging as there’s no given hint nor is there any consistency. Not to mention the irritating repetition of the noises that alert when a mistake is made.

Word blast gives you a cross word puzzle that has a hidden four lettered word inside of the jungle of random letters. Using the stylus, you can connect the letters together to form the word. Actually that’s all there is to it. Unless you change the difficulty to a different setting, the challenge here is void and the increased difficulty only adds more points to the end goal. 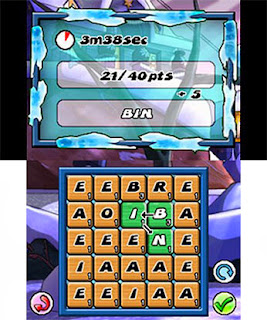 Hangman isn’t necessarily, how would you say, enjoyable. There’s no local multiplayer to utilize which makes the already somewhat shallow paper game even worse. If you’ve ever played hangman before, you’ll remember that one person randomly comes up with a word and you have to guess right within a certain number of turns or, well, a stick man dies a gory death. In this game these guesses take the form of tokens to be used within a set time limit.

If you run out of coins and still have a few minutes on the clock, you’re given another word to try and guess. There’s no punishment for failing, either. The hint system sacrifices tokens that reveal a letter and it’s a little too generous for a game that is meant to be testing the brain matter.

Pick Letter is by far my personal choice. Horizontally spelling letters has never been so fun! With a time limit, the player is supposed to spell out as many words (preferably five lettered words), as one physically can using a certain letter, which can be skipped as many times as needed.

Other than the one song that plays nonstop and the meaningless leveling/trophy system, Letter Challenge doesn’t have any additional content to unlock nor radiates any sort of inspiration for the player to come back to it once they’ve played each of the minigames a couple of times. With that said, Letter Challenge is recommended for gamers with children and grandparents at home who are looking for a simple but addictive diversion.