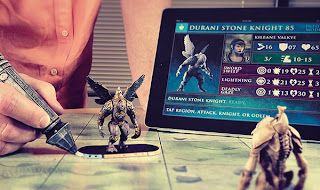 Golum Arcana might not be a name that means much to you, but if you’re a fan of tabletop gaming, you better hustle over there and drop down the biggest wad of cash you can find. Because this thing is everything you ever wanted in a game.

Think Warhammer mixed with Disney Infinity. Yep. That awesome. It’s a game that uses a neat little digital pen thing to help automate so much of the tabletop busywork. Stuff like handling terrain, line of sight, statistics adjustments – these kinds of things typically make tabletop games slow and methodical experiences, best played over a weekend rather than a hour or two.

But with Golum Arcana your little iPad friend will handle all that, letting you play short skirmishes over the course of just an hour or two. There’s no more arguments over the rules or flipping through hundred-page rule books looking for one tiny sub-rule within a rule; the iPad’s going to know everything and tell you who’s right, and who just lost their general.

And then there’s a couple of little features built in that could only be possible through a game – there’s online leaderboards and the ability to save your game. Save. Your. Tabletop. Game. Mind = blown.

I know I’m being a little enthusiastic here, but this is the kind of game I have been hanging out for ever since the original Skylanders hit shelves. Why companies like Wizards of the Coast and Games Workshop have ignored the clear potential here is beyond me. But then one of the great things about Kickstarter is that is allows little start ups to be innovative where the incumbents aren’t willing to.

We’ve reached out to the developers of the game. Expect to hear plenty more from them into the future from us.

Be sure to snap up those last-minute EB Games Expo tickets, Aussies