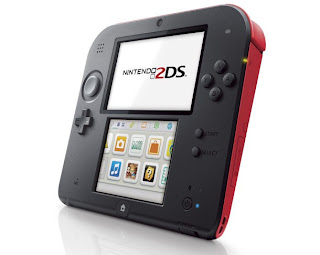 Today has been an active day in the Nintendo household. Not only was a price cut announced, but a new system bundle was confirmed and a brand new variation of the 3DS was unveiled.

Firstly, the big news; the Nintendo 2DS, as pictured to the right. Excluding the clam-shell design, 3D functionality, and the Wi-Fi slider (now activated and deactivated through the software), the system has all the features of any other 3DS model and behaves in the exact same way as a 3DS. What would be the reason for buying one, you ask? Besides the upgraded storage from 2 GB to 4 GB, a solid $40 US is slashed off of the price of a standard 3DS, making the console only cost $130 US. While some may be put off by the lack of the clam-shell design, the intended market of the device is not the dedicated handheld game player. In an interview with IGN, Nintendo of America president Reggie Fils-Aime stated that the 2DS opens the 3DS market to those under the age of seven years old, the age barrier which Nintendo recommends for experiencing the 3D effect on the original 3DS system. More evidence to the fact that the 2DS is aimed at a young audience is the consoles release date of October 12th, the same exact day that Pokemon X and Pokemon Y are planned to hit store shelves. For those looking for a good size comparison between the 3DS and 2DS, the following introductory video gives some good examples of what to expect;

For those looking for a bit more value in their future Wii U purchase, Nintendo has also announced a limited-edition Wind Waker HD Wii U bundle. Available for purchase on September 20th, the bundle includes a Wii U Deluxe Edition, a custom Wii U gamepad with Zelda-style inscriptions, an eShop code for The Legend of Zelda: Wind Waker HD, and a downloadable copy of the Legend of Zelda compendium Hyrule Historia. The bundle is to come with a $300 price tag, making it just as expensive as the new Wii U Deluxe Edition consoles but filled with more content. As for where to acquire the bundle once it’s out, there have been no confirmed retailers but it is not unreasonable to think that specialty retailers like Gamestop will have the first crack at distributing the limited edition consoles.

My personal take on all of this? Good, good, and great. While the 2DS has an unfortunate name and does not have the ever-so-sleek clam-shell design, its cheaper price will undoubtedly bring in more consumers and boost game sales across all of the platform. The Wii U Deluxe Edition price cut is very much needed, as the upcoming Playstation 4 console would be only $50 US more and look far more appealing due to the advanced hardware within the console. The Wind Waker HD Wii U bundle is spectacular, as the downloadable game and extras are a cost-effective way to enhance a purchase without taking a huge hit to losses. I will definitely be picking up that Wind Waker HD bundle wherever I can get my hands on it.