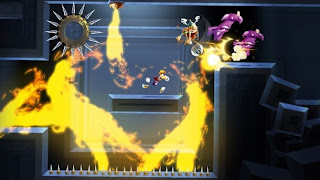 I thought it would be tough to follow on from Rayman Origins. That game brought Rayman into the era of HD gaming in spectacular style, with the gorgeous Ubi-art framework creating a vibrant world and a standard of animation that hadn’t been seen previously – even Nintendo’s studios have struggled to keep up with the various Mario and Donkey Kong games.

That framework was supported by some stunning level design, a near-perfect mix of challenge and accessibility, and a truly wonderful range of characters. It was always going to be a tough act to follow.

Rayman Legends is a incremental improvement on Rayman Origins. Its refinements and rare addition to the formula are all most welcome, but the game is its own worst enemy; where Origins was spectacular, Legends is just more of the same. In fact, there’s even an aftertaste of unoriginally left after playing this game… it’s almost like it’s just a darned big piece of DLC. 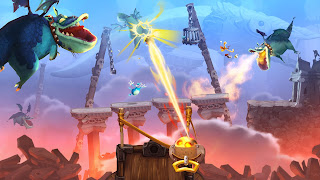 I suspect that the entire experience would be superior on the Wii U, which was originally destined to be the exclusive platform for the game. There are numerous features throughout Legends that were clearly designed for the touch screen, from the trivial (scratch cards) to the critical gameplay functions (cutting ropes, moving objects around). This stuff all works on the Xbox 360 without the second screen, but the experience is just that touch more generic; I do believe the innovations from Origins to Legends were all designed around Nintendo’s hardware.

With that said, the game is still a joy on the Xbox 360. The colours on display are gorgeous, and the levels were designed with an expert’s sense of balance – the first few levels do a brilliant job of easing people in, and then the gears get shifted and suddenly the secrets are much harder to track down. Those secrets are required to see everything this game has to offer, and so while it’s relatively easy to get to the end of the very final level, doing to while also getting those gold trophies will drive the completionists insane. 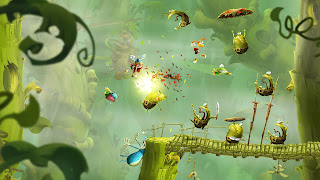 Difficulty in modern games is always a tricky balance to find; on the one hand publishers can’t risk building too many games where the credits screen is too hard for the casual players. That would lose their repeat business for future releases. On the other hand, more serious players do crave a challenge. Rayman, more than any other platformer strikes a balance between accessibility and challenge and as a consequence it is genuinely a game that every player can appreciate.

Each of the characters within Legends, both hero and enemy, are overflowing with bright cartoon charm, and the levels cover a massive range of environments and situations. Origins did a good job of keeping repetition to a minimum, but Legends ramps that up a gear. Because levels are nice and small, they’re packed with energy – one minute bounding across perilous drops, the very next crashing through enemies to reach a vine to climb to a hidden treasure. The nature of the levels means its unlikely that you’ll unearth everything in the first run, but subsequent runs remain a joy thanks to Rayman’s athleticism and the incredibly charming visuals and soundtrack. 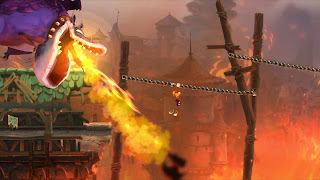 There’s also some great distractions away from the main game. A daily challenge will be enough to get people checking in every day to prove their poweress, but the real winner is the soccer minigame, where local players will be bouncing and kicking the ball in a high-action and always-funny little game that I would love to see expanded into a full, independent release.

If there’s another 2D Rayman game to come after Legends – and there really should be – it will need to do more to mix up the formula than Legends did to move on from Origins. While there is something of a truth in the statement “if it ain’t broke, don’t fix it”, and while this is a perfectly delightful game in its own right, Legends does not have the same “wow factor” that Origins did, and I would hate to see people start to think “more of the same” when thinking about this franchise in the future.