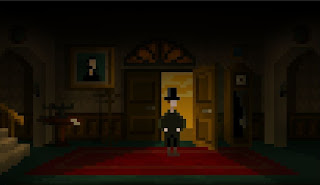 The Last Door is a unique game. Not because of its typical horror story setup of a nondescript man being summoned to his eccentric friend’s dark, desolate mansion. Not because of its rudimentary point-and-click puzzles that, like those of many adventure games, tend to frustrate. The Last Door is a unique game because of its brilliant soundtrack, intriguing mystery, and painstaking attention to detail, all of which coalesce beautifully into a haunting experience that eventually erases any sense of familiarity.

This nightmarish narrative of a demented millionaire named Anthony Beechworth is the passion project of a small team of indie devs (called The Game Kitchen), as its pixelated graphics and Kickstarter origins suggest. Surprisingly, the necessitated minimalism often works to the game’s advantage. There are only two instances where the low production values significantly hamper the player’s enjoyment. First, the official English translation of what was originally a Spanish script is full of typos and strange, cliché phrasings that took me out of the story on more than one occasion. Second, as appealing as the low-fi graphics are, they often get in the way of puzzle-solving. When you need to find a tiny object in the corner of the room to proceed, the visual simplicity can be frustrating.

But I would much rather talk about what the intentionally Spartan design gets right. As mentioned above, The Last Door features an utterly spectacular orchestral score, one I plan on returning to long after I am done playing. There is certainly something to be said for a mesmerising, pitch-perfect soundtrack that does wonders to immerse the player in the game’s world, and composer Carlos Viola understands this better than most. The blocky art does a decent job of conveying the harrowing horrors contained in Beechworth’s mansion, but the music manages to suggest so much more.

The first of two released episodic chapters takes place entirely at the site of the mansion. Within lies classic point-and-click adventure gaming. The inventory system is refreshingly simple and the puzzles are for the most part competently executed, but were they the only enticements, I would not have been compelled to finish Chapter 1. I found myself increasingly frustrated as, after an initially satisfying pace, I began to accumulate more and more items without the slightest idea of how to use them. Most vexingly, the protagonist refuses to, for example, use a hammer to smash a wall made of wet concrete if the player has not yet triggered a certain sequence. He says, “I don’t want to make a mess,” and I am forced to wander around aimlessly until I strike upon the correct action to cause him to change his mind.

After a point, I gave up and searched the game’s official forums for clues to help me progress, which quickly set me on the right path again. Fortunately, this obtuse puzzle-solving is the exception rather than the rule in The Last Door, and I completed Chapter 2 without any outside assistance. Unraveling puzzles rewards the player with tantalizing tidbits of the game’s overarching mystery, which in combination with the score and incredibly detailed backgrounds provides the drive to keep playing.

After having played through two creepy chapters of my quest to learn why so many people associated with Mr. Beechworth are insane and/ or dead, I am still no closer to discovering the truth. Despite the often cheesy dialogue, the story is gripping enough to make me eager to continue exploring the deranged world of The Last Door. The Game Kitchen has to start giving me some answers in Chapter 3 (to be released this September) and subsequent chapters if it wants to ensure I stay for the remainder of the ride, but the marked gameplay and graphical improvements in Chapter 2 have me optimistic this twisted tale will only become even more entertaining. Here’s hoping.