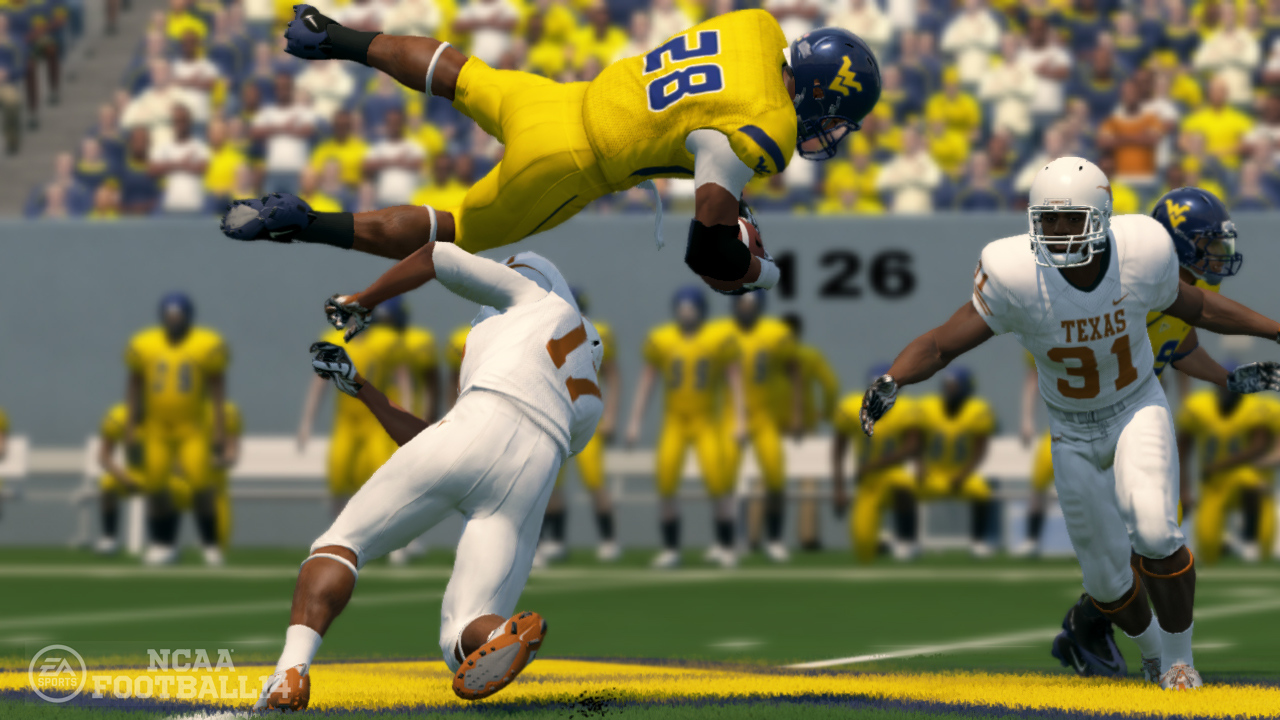 Sports titles release annually and often to the criticism of “been there, done that – show me what is new.” It is a fair question, because when you have a yearly release, it can be difficult to implement features that stand out and feel like they are worth your money.

NCAA Football 14 is a very good sports title, I will get that out of the way immediately. That being said, it feels like something is missing. Maybe it is the speed, or it is lacking just a bit of character – it can be tough to put a finger on something like this, but while there are gains in several places, I cannot help but feel like maybe this title is hitting its ceiling for this console generation.

One of the challenges facing NCAA Football is that the series is often compared to the Madden series, and because of licensing issues the NCAA game cannot use real players and their names. Contrast that to Madden, which leans very heavily on some the often colorful NFL personalities, and the NCAA Title tends to be a step behind in the presentation. An additional concern when comparing the two franchises is that the NCAA game just feels like it plays a little slower. This is something you can adjust in the settings, but Madden is still the faster, more energetic game. Lastly, most new innovations and technologies come to Madden have a habit of arriving to NCAA a year later, such as the Infinity Engine. This has a way of making NCAA Football feel a bit too familiar if you play the Madden title the year before. 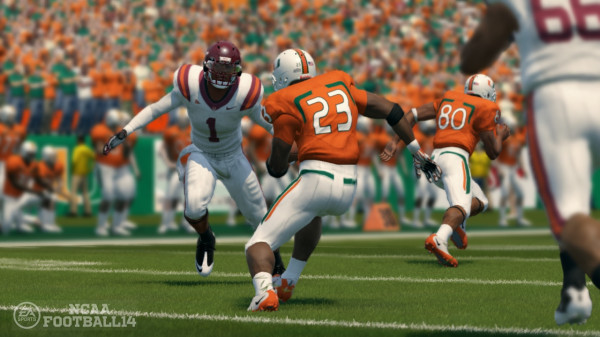 The obvious thing you look for in a game that gets released year after year is the visual presentation. Here, the game looks fairly good – but it does not feel like it has made a lot of progress from the last year or two. The animations that the Infinity Engine enables are good most of the time, but the models themselves feel very similar to one another – almost generic. The stadiums look nice enough in the pregame show, but they are largely the same stadiums we have been looking at for years now, with little to no animation. The grass on the field, and the weather effects hold up a bit better.

Commentary in sporting titles is a tough affair as well. Developers are trying to recreate the game day experience as best they can, but that can be hard to do because of the random nature of a football game. In real life, an announcer observes something on the field and they have a wealth of experience to call upon, and can spin it to match the particulars of the play. In video games, certain criteria are met, and one of a handful of canned responses follow. They sound good, and are somewhat varied, but in one season I had heard just about everything the announcers had to say – multiple times and sometimes the exact same thing more than once in a game.

Now, this is hardly all doom and gloom. While the presentation might not have blown me away, there are some serious gains to be made by implementing a refined version of the Infinity Engine that debuted last year with Madden. There are still some odd things that can happen, but far less of it than we saw in last year’s Madden, where players from the same team would take each other out frequently, and after the play would end crazy shenanigans would sometimes happen. Running the ball and returning kicks is more fun than ever, as the controls on the ground receive a breath of fresh air from the system. Combine moves, burst ahead with speed and create some truly fun collisions while trying to make sure you do not run out of stamina and lose the ball or get your player hurt. 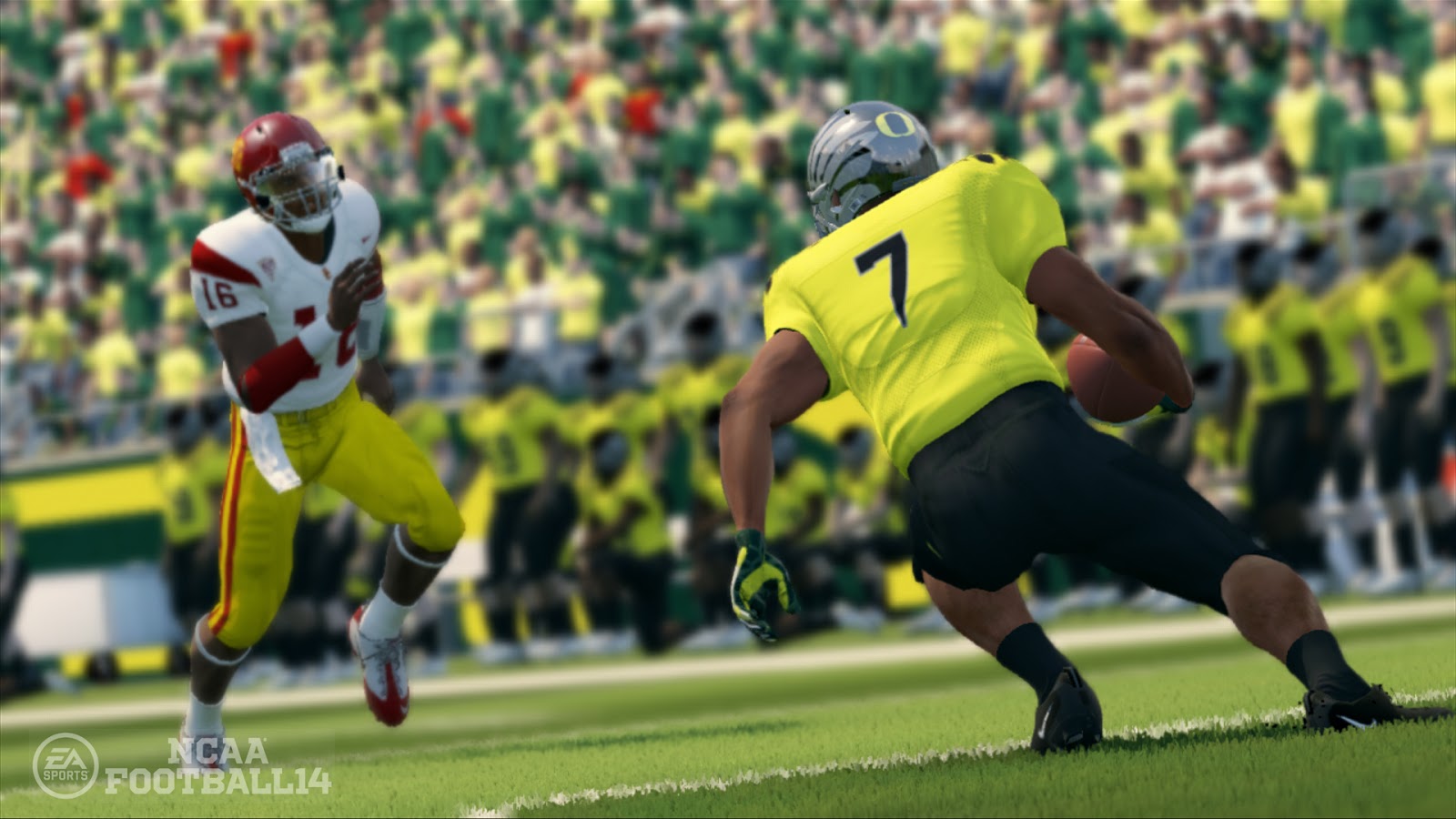 Pretty much all of the modes you would expect from an EA football game find their way onto the disc here, with online and offline Dynasty modes, the trading card Ultimate Team, single game and single season play. Dynasty mode lets you play as a player, or as a coach. The player modes always have an interesting hook as you try to develop your traits and ‘live the life’ of your player, so to speak. The coach mode gets made a bit more interesting by providing an experience/level system for head and assistant coaches, who can put points into different areas. These perks can include things such as improved recruiting efforts, or better play on the field.

I have mixed feelings on the recruiting class that makes up a part of your weekly activities. I am someone who likes to micromanage and milk the absolute most I can out of the ‘game within a game’ modes like this, because I am someone who likes to tweak stats out. That being said, in older versions of NCAA Football, I spent as much time off the field as on it, and in this case I think it is for the best that the recruiting process is streamlined so you spend more time playing the actual game.

I would have liked to have seen EA take a few more chances with the tried and true formula here, but in the end NCAA Football 14 provides an enjoyable game without a lot of surprises.

Trailer: Ratchet & Clank: Into the Nexus

The sad story of Ashes Cricket 2013