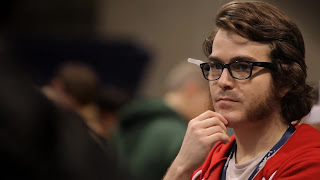 As many in the games community will be aware by now; this weekend brought with it one of the sorriest exchanges in gaming history. GameTrailers’ Marcus Beer decided to take a crack at Fez developer, Phil Fish, over his disdain with the media for asking him his thoughts on the Xbox One’s “now we’re indie friendly” backflip. This happened publicly on GameTrailers’ Invisible Walls show, and in no way did Beer approach Fish prior to making his comments. It was opinion.

In response Fish blew up on Twitter, telling Beer to “kill himself,” and then apparently cancelled Fez 2 and announced he was departing the games industry.

Let’s get something straight from the outset – Fish’s behaviour was inappropriate and excessive, and in no way am I going to defend it. But Fish’s reaction was also not done in isolation to a single piece of criticism. It was the proverbial straw that broke the camel’s back. Fish has been chafing with the standards of games journalism for some time now, and as far as I’m concerned that much is completely justifiable. A large number of the paid writers and content producers in this industry badly need to head back to school and do some refresher courses in being a journalist or editorialist, because the standards that this industry holds itself to are ridiculously, embarrassingly low.

Fish had numerous run-ins with plenty of sites in the months leading up to this instance. For instance, he was justifiably critical of some who decided to build stories out of comments Fish made on Twitter. Is Twitter a open place for discussion and do people need to be careful about what they tweet? Yes. Is it a valuable resource for a journalist? Absolutely. But a journalist’s role is not just to take random tweets and write stories about them without validation. A journalist is responsible for verifying both the context (meaning) and accuracy of any statement made by any person on Twitter – or anywhere else for that matter. Why? Because it’s easy for someone to make both deliberate or accidentally misleading tweets, and it’s nearly impossible for someone to voice an opinion with the necessary context for it to constitute being an position in a debate in a couple of 160-character tweets.

For a good journalist, this means picking up the phone or dropping an email to the person in question to ask for them to clarify what they meant by their comments. If their comment contains data or a factual claim, the journalist’s job is to follow it up and validate that information. It takes longer. It’s the ethical way to do things. If the person that the story is about is unwilling to respond to media enquiries (as Fish likely would have been over his comments on Twitter), then a good journalist would understand that integrity was more important than publishing the story anyway when it’s not ethically defensible.

Looking beyond Fish’s personal issues, it’s also easy to see how he could look around and be frustrated at the reporting he sees across the whole industry. He’s not the only one – here’s an example of another developer who is disappointed with the sensationalist approach to reporting and headlines by the games media. These stories are sadly not uncommon. When I look at the reporting in this industry, I am likewise disappointed.

For people who don’t know my history, though I’ve been writing about games for around 15 years now, the bulk of my time as a paid journalist (and editor) – my ‘day job,’ so to speak – has been in business, technology and finance writing. The great difference between games writing, and writing in other fields can be boiled down to a couple of important points:

1) Journalists don’t assume that they are the experts in areas outside of their expertise.

2) When a journalist is the expert, they still justify their positions with more than “it’s my opinion.”

3) A good journalist gets their own stories, and doesn’t quote verbatim from another publication without verifying the content himself or herself.

Journalists in the games industry seem to have forgotten that they are not the successful business people that work in the industry. In fact, most of them don’t have any formal qualifications in business or a background in management. Few have game development experience. Few have a background in marketing. So why are there so many games journalists out there writing about management, development and marketing as though they’ve written textbooks on the subject?

It goes further. Rather than speaking to people working in the industry, we have journalists quoting other journalists, which is a decidedly amateur thing to do – first year journalist students are told not to do that. Other journalists write entire stories around quotes that they’ve found on other websites, without contacting the person quoted themselves. We have journalists passing judgements on what is said and done by industry professionals without supporting evidence, and we have more and more journalists hiding their opinions as though that is a defence for what they’ve said. Very few seem to understand that a journalist’s opinion is worthless unless it’s supportable with hard facts, supporting evidence, and expert’s opinions.

Journalism is fundamentally different in this way to criticism. A good critic can put forward a persuasive argument. A good journalist finds other people who can give him the story.

Marcus Beer’s attack of Fish was nothing more than an opinion. It wasn’t defensible by anything more than “it’s my opinion,” and therefore it is very poor journalism. Post event I’ve seen Beer defend his statements with statements like “I’m not a journalist, I’m a opinionist” – completely misrepresenting his role as a curator of content in the media and his influence in the process. In this way, he has been just as irresponsible as Fish’s Twitter tirade.

There are some truly great journalists and editors in the games industry – Leigh Alexander of Gamasutra is someone whose writing I will always read and rely on to be supportable by more than “it’s my opinion,” and the various writers and editors at magazines like Develop and Edge have the right contacts to be able to rely on their reporting to be accurate.

Unfortunately there are also a load of reasonable writers and gaming fans who have landed jobs as games writers but could, at best, be described as armchair experts.

Ashes Cricket delayed to the next Ashes competition