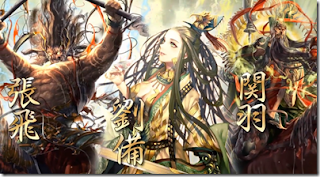 Tecmo Koei is best known in the west, perhaps, for the Dynasty Warriors franchise (or, at least, the Koei half of it is).

In Japan, though, it is equally popular for the Romance of The Three Kingdoms games. These are hardcore strategy games that stopped being localised in the west about the same time Call of Duty became a thing, but for those of us that understand Japanese well enough to play, these are endlessly rewarding games with real depth.

Square Enix looks like it’s taking a crack at the same classic novel in what we would be on being a mobile strategy game (and probably a Japan-only one at that). But with that said the trailer (below) tells us nothing about the game – Sangokushi Rumble could just as easily be some kind of action game in the vein of Dynasty Warriors (also based on Romance of The Three Kingdoms). What we can see from the trailer has a more anime art aesthetic than the realistic palette of most of Tecmo Koei’s Romance titles, and it also seems to be taking a couple more artistic licenses with the characters.
Romance of the Three Kingdoms is a book about real people. In this game, however, the historical general Liu Bei has magically turned from a man into a woman.
While we appreciate historical accuracy in our games, if this game turns out to be great, it’s hardly going to stop us from getting right into it. Colour us interested to find out more.
Share this