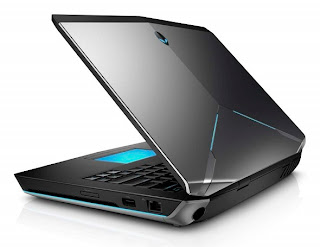 Dell’s Alienware brand is the complete opposite of the US PC giant’s usual fare. Where Dell laptops are boring corporate affairs, Alienware games are bright, loud, and very, very gamer focused.

With a cost to match Dell has found itself something of a niche in the market – those people that do want to play games on a laptop pretty much go with Alienware by default. And so those gamers will no doubt be keen to see what Dell unveiled at this year’s E3.

There’s three new laptops – 14-, 17- and 18-inch. Naturally the 18-inch one isn’t that portable, but it’s being positioned as a useful desktop replacement. One thing Alienware has always been known for is its build quality, and Dell promises this is the case here as well, with 60 per cent of the machines being built out of metals (so in other words sacrificing light weight for durability). Other neat gimmicks include a 3D panel on the 17-inch model, an anti-glare LCD display for the 14-inch model (as in, the only one you’d likely to carry outside), and the 18-inch model features full HD discplay and PLS wide viewing-angle technology.

Time to be brutally honest – I have no idea what any of that means. I’m not a PC gamer as a rule of thumb (mostly because I’ve never had the money to buy and keep upgrading a gaming PC), but I do know that every time I’ve seen an Alienware laptop on display in a shop, I’ve been impressed by what it does. I’m sure these are an evolution on the previous models, because I do believe in Alienware as a premium product line.

With the renaissance for PC gaming alive and well, Alienware’s probably well-poised to see good growth, now I think on it.