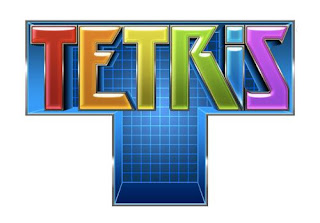 When Tetris Axis launched at retail back in late 2011, it probably didn’t set the sales charts ablaze. The 3DS library was still underdeveloped and the prospect of paying $29.99 USD for yet another revision of the world’s trendiest puzzle game might have been underwhelming to most. Fast forward one and a half years and now the same title is making its eShop debut for a paltry $9.99 USD.
Without even knowing about this version’s quirks, Axis is now a top contender for your dollar. The admittedly fully featured Tetris Live has since departed the DSiWare service so your only real alternatives now are the retail DS version and the Virtual Console port. This retail-quality rendition of Alexey Pajitnov’s classic should go down better as a title always available in your pocket.
I won’t insult your intelligence with an explanation of how the game’s core mechanics work, but as Matt touched on in his original review, this is one of the many formula revisions with “enhanced” gameplay. You can store extra blocks, drop them instantaneously, and execute tricky spin manoeuvres to your heart’s content. This makes Axis a much more playable experience than its greyscale predecessor, albeit significantly easier in the process. If you’re a purist, the tools exist here to at least attempt to emulate the challenge of the Game Boy title.
Beyond this, there are a variety of modes to toy with. There’s a good balance of old and new here. Highlights include Stage Racer (manipulate your Tetriminos through tight corridors) and Capture (collect stars via colour matching). They also threw in the obligatory experimental modes such as AR and a sort of pseudo 3D Tetris. These modes won’t occupy your time for as long as standard “marathon” Tetris, but quite a deal of effort went into providing numerous spins on the blueprint. 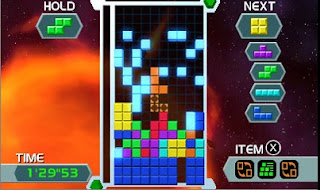 Arguably the most significant of the modes is the online multiplayer. Now that the game has been released digitally, player activity should see something of a resurgence. Unlike the (now defunct) DSiWare game, Axis also has local multiplayer for interested parties. Whether or not this function alone warrants an upgrade is debatable, of course. It’s worthy of note that many of the modes are playable with others.
In terms of fluff, there’s a decent range of classic compositions to throw into your Tetris sessions (provided you’re blasphemous enough to abandon the real Tetris songs). The Mii integration has your avatar dancing along to these oldie beats on the bottom screen as you go about your block handling business. While charming initially, you’re probably not going to be enticed enough to bother with hunting down additional outfits. I suppose the caveat is that you’ll be constantly coming back to the game anyway, so why not?
Tetris Axis does little groundbreaking or fresh, but it never had to – it’s Tetris, folks. It’s a polishing of a nearly 30 year old concept that the younger generation will appreciate and veterans will consider viable in the face of previous iterations.