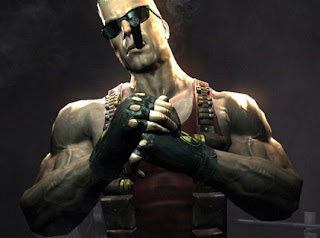 Is the Duke worth remembering before he went ‘3D’? The revamped second entry in the series makes a case.

I actually remember Duke Nukem II when it was released by Apogee (there’s a blast from the past) back in 1993. I can’t say that I played it though, as I was way too caught up in a little phenomena called iD Software’s Doom at the time. Which is kind of interesting considering that Duke would show up in FPS form only a few years later (in ’96) with the release of 3D Realms’ groundbreaking shooter – Duke Nukem 3D.

That seems to be the game that everybody knows the Duke from, but it was the side-scrolling action titles that were the origin for the character. The games were no slouches for their time, showcasing interactive environments, solid action and hints of the Duke Nukem signature ‘charm’ that audiences would become way more familiar with later on in Duke 3D. 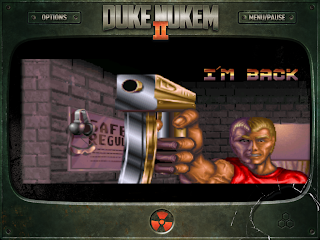 Some of that has actually been retrofitted onto Duke Nukem II for Interceptor Entertainment’s iOS adaptation of the game. The character himself now sports a look similar to his 3D re-visioning. Duke even looks more like himself, complete with his now staple shades.

A decent deal of the artwork in the game has likewise been retouched and brought up to current Duke convention and so has the music. I never played the original so I can’t really compare the sound, but the music is peppy enough (and even plays an 8-bit version of the guitar heavy Duke theme). Tunes aside, I loved the sound effects, which are gloriously old school and I found really fun to listen to as I played. In particular, the gun sounds are awesome and the ‘swoosh’ of the doors are super-cool (and might be the ‘sliding doors’ effect from Star Trek).

But, lets be honest – all the classic gaming charm in the world means very little if the title you’re playing is, well, unplayable. And with that in mind, I’m happy to report that Duke II runs, jumps and blasts just fine on the touchscreen of both the iPad and the iPhone. 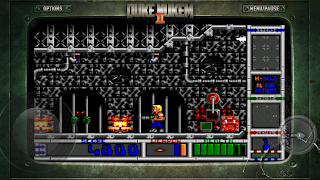 Control is super-simple; there are virtual buttons for firing your weapon and movement, and you can tap anywhere to jump. As usual, I found this one played better on my iPad mini just for the extra screen size, but if you’re stuck with ‘just’ an iPhone, you’ll do fine too. It’s a little easier to lose track of the ‘buttons’ for some reason on the smaller screen of Apple’s mobile, but it’s not a game breaker in any way.

One thing you should keep in mind however, is that Duke Nukem II is a classic side-scroller. Basically, that means that it ain’t easy. You won’t find it as tough as a Mega Man title, but you’ll more than likely find it to be a lot harder than your typical game of today is as you traverse the game’s 32 levels. Duke II comes from an age when games were made to be challenging in every sense of the word. Not that I’m complaining about the state of games today really, but titles like this weren’t made to tell a story or cater to the semi-gamer (read: casual) masses – they were built to challenge the skills of the user, and be fun enough to keep you trying again when you lose (and again, and again…). 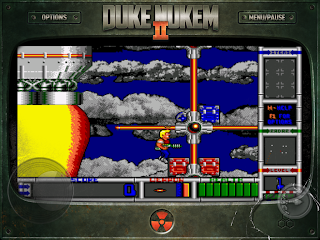 And to that end, 3D Realms and Interceptor have succeeded with the port of Duke Nukem II. This is a really fun little game that looks great on the sharp screens of the iOS line of devices and actually plays well too.

Duke II also offers a lot to do and see and updates a classic with a look and sound that better fits in with the current version of Duke. So even if you’ve logged plenty of time with Duke II back in the day, you’ll still want to give this one a go, even if it’s just to see and hear the differences.

Personally, I’d love to see a remade Duke Nukem ‘1’ (which was made in two parts) to go along with this. I skipped that one as well and a compilation of all three of Duke’s original adventures would be absolutely stellar. Here’s to hoping – in the meantime though, if you’re looking for a little challenging action in the old school style, Duke Nukem II should hit the spot nicely.