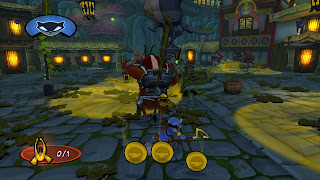 Sly Cooper Thieves in Time was a little worrying as a project. Sly is one of the more interesting game industry personalities and there was no guarantee that a new developer (Sanzaru) would be able to recreate that character to the same beloved standard for the fans.

A quick look at Sanzru’s resume would not have done much to allay fears, either. Sure the team did a good job porting the original Sly trilogy to the PS3 as a HD Edition, but otherwise Sanzaru has produced one of the weaker games in the Jak and Dexter franchise on the PSP and a couple of merely decent casual play titles.

So Sly Cooper fans must have been a little worried. The good news is they need not have been. Thieves in Time is a great entry in the series and the franchise has found a wonderful new custodian. Sly is as charming and entertaining as always, the game looks gorgeous and there’s a couple of extra tricks in here for veterans to enjoy. 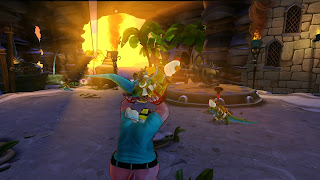 But first, the plot. Sly Cooper gets away with being a time travel story, filled with the typical logic flaws of all time travel plots, through its sheer ‘toon humour. Like the better modern Disney cartoons Sly Cooper laughs at itself as much as anything else, and because it does not even try to make sense, in terms of narrative it does not really need to. Mechanically it allows for Sly and Co. to drop into a huge range of different environments and is able to make those environments markedly different to one another. Being freed from any need to be consistent in terms of geography or time also means that these environments can be tailored completely for maximal impact.

Each of these environments are a joy to explore regardless of what character you are using, though they universally suffer from that most of obnoxious features that 3D platformers seem committed to labouring players with; the almighty collectathon. Though the genre has evolved nicely in the years since, say, Donkey Kong 64, there is still a fascination in these games with spinning, glowing icons that will force players to comb every section of every level. As fun as exploring everything from medieval Japan to prehistoric era earth, collecting stuff still gets old. 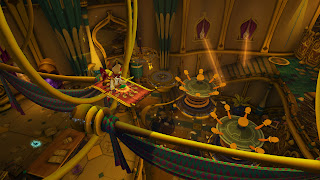 More exciting are the characters, as each new environment brings new characters to play with, and new skills to learn. this keeps the variety in play constant throughout the entire game (and it’s not that short). The downside of this variety is that it comes at the expense of being able to get really in-depth with these characters and the levels are not really designed with any single character in mind. There’s a couple of areas in each level that require the unique character skills, but for the most point these skills are underutilised and the game forces players, rather than encourages them, to use specific characters.

It’s frustrating to have to do this as the levels, vibrant as they are, are not interesting enough to demand that I cover every part of it to find all the loot. They are also easy to navigate around thanks to glowing dust that is painted over every object that can be interacted with. This might sound like a good thing, but as I wrote in an earlier opinion piece this week, I do have an issue with how much this system turns exploration into a simple game of follow the leader. It’s hard to get stuck in Sly Cooper, but there are times I kind of wanted to. 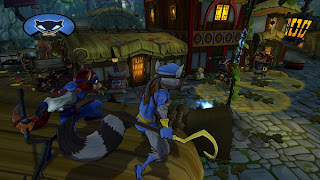 Level design aside there’s a lot to enjoy about wandering around and completing Sly Cooper’s missions. As with previous games there’s a nice stealth system in place and reasonably unique to the platformer genre. There’s a great thrill of the chase involved in those moments where players need to skulk around and steal things.

Less engaging is the combat. There’s nothing wrong with it outright, but it simply does not live up to some of the other masters in the genre. For normal enemies this is just a chore. The boss battles are truly grating – both in terms of the physicality and the puzzle process that players need to go through to overcome them is generally uninspired. I would suggest that the developers focus more on the latter and do away with stealth entirely next time. Building boss battles that better took advantage of the superb stealth elements would have been preferable.

Sly Raccoon is in safe hands, though the developers might need a little more experience before the franchise rejoins Sony’s most valuable properties. But Thieves in Time? It’s worth the investment. Grab the PS3 version and enjoy it on the Vita too – Cloud saves and all.