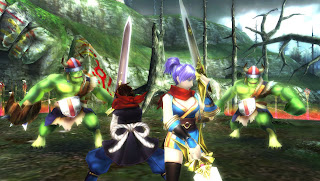 It was a relief to see that Ragnarok Odyssey had arrived in Australia. Here was one of those early Vita games that I was really looking forward to, but was worried it would be too niche for this market. While I needed to wait a while to finally get my hands on it, it’s largely been worth the wait.

That said I did have a different experience to Chris when he played the game for review a few months back. By no means a lesser experience, but a different one. Which Chris felt the game was fundamentally different to Capcom’s behemoth Monster Hunter franchise, I felt it was slavishly in debt to it – in the same way that most FPS titles are in debt to Call of Duty.

When you boil Ragnarok Odyssey down to its core, it’s the same formula as the Monster Hunter games. Players take an avatar on a series of short (in this case, around 30 minutes) missions to either gather loot, or take down monsters. The small monsters die relatively easily and provide plenty of materials for powering up equipment, which is important for taking down the bigger monsters which are real brutes, and can easily take that full 30 minute time span to defeat. 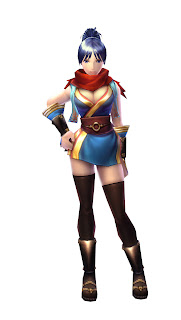 Just like Monster Hunter the real hero of Ragnarok Odyssey is those boss battles, which are intense, frustrating and rewarding all in one. After half an hour of swearing hands and swearing, it’s euphoric to finally see the boss enter his animated death throes. These battles require patience – first to learn the enemies patterns, and then to learn how to exploit them. Each boss has unique weaknesses, and tailoring the hero’s weapon and equipment load-out to even the odds against those bosses is, also, a learning process.

Also just like Monster Hunter, Ragnarok Odyssey contains fairly small environments, but very attractive ones. Each area of the game is broken up into small sections – around 10 per environment, and each of those sections are a quick walk away from one another. Each of these sections is also meticulously detailed and vibrant and is a textbook example of quality over quantity. Characters and monsters are varied and interesting, water, fire and snow effects are spot-on, and generally speaking this is a very pretty game.

Combat itself is fast and fluid. Unlike Monster Hunter there is a proper lock-on button here, and to be perfectly honest this feature alone makes the game more entertaining. Dying because a monster has run behind your hero and gored him/ her up the backside before you can swing the camera around is not fun – it’s simply bad design and Monster Hunter’s insistence of maintaining the “no camera lock button” style of play feels antiquated after five minutes with Ragnarok Odyssey. It’s no easier for the lock on button, it’s just more playable. Having now played Monster Hunter 3 Ultimate’s solution to the lock-on with the 3DS and Wii U, I can still safely say that the proper lock-on that this game uses is superior. 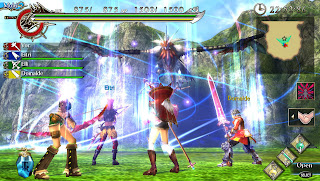 Players have access to two main attack commands, a dodge button and a jump. Stringing interesting combos together using each of the varied weapon styles will take a while to master, but once you have Ragnarok Odyssey plays like a dream. Rather than messing around in menus to find the right potion to drink, as you do with Monster Hunter, the inventory is conveniently mapped to touch screen buttons that are placed in unobtrusive spots on the screen, allowing people to focus on simply killing stuff.

But none of this is to say that Ragnarok Odyssey is necessarily better than the Monster Hunter games. It’s limited in some fairly significant ways that hold it back over the longer term. The multiplayer is not as compelling as Monster Hunter’s near-MMO structure. Once you get some games going it’s fun, but the sense of achievement in taking down an especially large monster in Ragnarok Odyssey is simply not as great, as there are fewer tactical options. With Monster Hunter you’ll be wanting to lay down traps, mark your target to follow him around, and skillfully combine the strengths and weaknesses of the various weapons in the party. 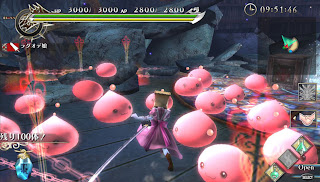 With Ragnarok Odyssey it’s more a matter of locking on to the enemy and whaling away. It’s fun, but the sense of camaraderie is not there.

There’s also the power curve. Grinding out the better equipment takes a great deal of work, and some enemies are incredibly difficult, if not impossible to take down without this equipment. Even when the game tells you you’re ready for the beastie, being one-hit KOed (or close to), is less a sign that you need to practice and more a sign that you need better stuff. Looting works in a fairly similar way to Monster Hunter, with the main difference being players don’t need to gather natural mushrooms and ore and bugs from predefined gather spots. Killing enemies will generate everything you need.

But, while the looking in Monster Hunter was generally paced in such a way that people could feel like they’re making progress, with Ragnarok Odyssey it feels like, at times, you need to find some incredibly rare elements through sheer, raw luck to progress the game. Long term this does put a significant dampener on the whole experience.

On the whole Ragnarok Odyssey is indeed a clone of the formula that make Monster Hunter just a popular franchise. That said it is commendable that the developers have taken the time to try and fix some of the problems that plague the Monster Hunter games while keeping the big, epic fights that people sign up for with these games in the first place.