In the far future, Mars is on the brink of civil war.
200 years after a planet-wide cataclysm ended the effective human reign on the planet and ruined most of what had been built on the formerly dead world, things are starting to get rough again. Colonists, mutants, religious zealots, and the general population that’s still trying to forge a way on life on the world are at odds with an oppressive government.
After watching that, you might think Mars: War Logs is a shooter or an action game of some kind, but it’s actually an RPG. Set firmly in the classic cyberpunk mold, Mars follows main character Roy and his companions on a dangerous trek across the Martian surface with no shortage of things to do.

Mars War Logs plunges you into a thrilling cyberpunk RPG on the Red Planet. You will develop Roy and his combat style by choosing from dozens of skills and perks. Pick from pure combat, stealth and trickery, or fierce Technomancer powers. The choice is yours! The real-time combat system requires both reflexes and tactics while you battle fearsome opponents and Mars’ most terrifying creatures in dynamic combat. The crafting system lets you create and modify equipment to maintain an edge over your enemies. Dialogue choices as well as your actions will influence the destiny of everyone Roy crosses paths with…and perhaps the fate of all the colonies on Mars.

Get your ass to Mars (yeah, I couldn’t get through this without saying it) when Mars: War Logs arrives on Xbox Live, the PSN, and the PC this Spring. 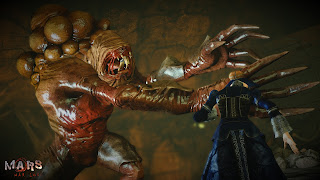