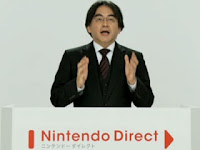 Nintendo loves its fans. Maybe that’s why it’s having a Nintendo Direct presentation on Valentine’s Day. Or maybe they just want to talk 3DS and Wii U games.

There isn’t much of a description for this one, but Nintendo has indeed scheduled a Nintendo Direct for tomorrow morning. What’s on the blotter? Well… we actually have no idea other than the fact that the company released a statement, saying part that this would be a “new installment of Nintendo Direct focused on upcoming Nintendo 3DS and Wii U games”.

In any event, tune in right here for all the answers as to just what that might mean and to see (and/or hear about) what games are on the horizon for Nintendo’s family of consoles. The big show starts up at 6am Pacific and 9am Eastern Standard Time, so set your alarm.