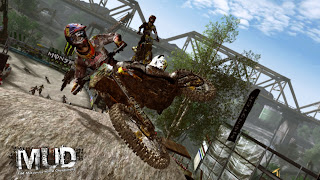 There was a time when motocross videogames ripped their way onto store shelves several times a year, but those days are long gone. If you’re one of those fans that grabbed nearly every motocross release back then, it’s time to grab your gear once again, because Namco Bandai just announced that the fully licensed MUD – FIM Motocross World Championship is now the official game for Motocross and that it is sliding into North America on February 26, 2013.
The game is in development by Milestone, who are no stranger to racing games, in fact, it’s all the team has developed since its MS-DOS game, Screamer, way back in 1995. From Superbike 2000 to the recent WRC 3 FIA World Rally Championships, it has a long list of officially licensed titles stacked in-between. From a brand new game engine that allows for full track deformation to a gameplay system that balances the intense handling woes found in actual motocross with a fun, yet challenging player experience – it looks like Milestone is putting all its past experiences into making this the motocross game that fans have been craving for.
Before dropping the full presser, Milestone has put together a great series of developer diaries for the game and I’ll start you off with the first one below:
Find the rest of the developer diaries (and much more) at the game’s official website: MUD –FIM Motocross World Championship.
***
MUD – FIM MOTOCROSS WORLD CHAMPIONSHIP TO ENTER THE NORTH AND SOUTH AMERICAN ARENAS
Start Your Engines for the Most Authentic and Comprehensive Motocross Video Game for the Xbox 360, PlayStation®3 system, PlayStation®Vita system and PC
SAN JOSE, Calif., (January 11, 2013) NAMCO BANDAI Games America Inc. announced that MUD – FIM Motocross World Championship will be available for the Xbox 360® video game and entertainment system from Microsoft, PlayStation®3 computer entertainment system, PlayStation®Vita system and Windows PC* in North America on February 26, 2013. MUD – FIM Motocross World Championship is a motocross racing game created by Milestone, one of the most recognized racing videogame developers, and is the only video game to officially feature the MX1 and MX2 championships. The game also features the Monster Energy FIM Motocross of Nations and presents the official tracks from around the world making this high octane racing experience the most authentic motocross game to hit North America and South America.
Fans and followers of the sport will also be delighted to see their motocross heroes surge across the tracks on-screen as MUD – FIM Motocross World Championship features a full roster of all the teams and world-renown bikers on the motocross racing circuit, including top ranked U.S. supercross champion Ryan Villopoto.
“Motocross is a heart-pounding, adrenaline-pumping sport that involves incredible finesse as well as physicality,” says Villopoto. “This game will be a great opportunity for gamers and motocross fans to immerse themselves into the extreme sports world by racing through intensely rugged terrain and pulling off high-flying tricks.”
In MUD – FIM Motocross World Championship motocross fans will get more than just their hands dirty as they must use their guts and guile on the track during races, elimination gauntlets and head-to-head showdowns. Every bike produces different rips as they tear through the mud tracks, creating dynamic terrain deformation. Players can also take to the air and perform jaw-dropping stunts and tricks in the “Monster Energy Trick Battle Mode,” which offers 30 different tricks in three spectacular arenas. Players can also unlock more challenging events and spend their winnings on unlocking new tricks, better teams, or snazzier gear to deck-out their lean, mean two-wheeled machines.
“We are enthusiastic to release the game in North America with NAMCO BANDAI Games America Inc. This partnership will ensure the best marketing and support to the game in order to fully satisfy the gamers community who is heavily waiting for MUD American release,” affirm Luisa Bixio Milestone Marketing and Sales Director.
Behind the dangerous stunts and gritty tracks also lie great passion and appreciation for all the fans that support the athletes. To coincide with the lead-up to the game’s launch date, NAMCO BANDAI Games America Inc. will hold a “RV2 Experience” contest to make one fan’s dream of meeting Ryan Villopoto come true. One lucky winner will be a VIP at one of the motocross events, watch the races that day, and join Villopoto for photos to commemorate their special day. For contest details, please visit www.mudmotocross.com.
MUD – FIM Motocross World Championship is rated “T” for Teen by the ESRB, and will be available for the PlayStation 3 system (both Packaged and Digitally), PlayStation Vita (Digital only), Xbox 360, and PC (via STEAM) in North America and Latin America on February 26, 2013. For further info please visit www.facebook.com/MUDmotocross.
*Windows PC will be available only in digital format via Steam (www.steampowered.com).
Share this

The weekly discussion: Your hidden gems