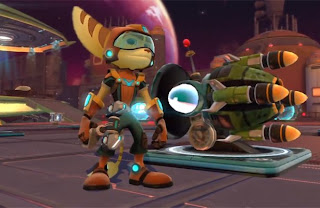 I like the idea behind Ratchet and Clank Q Force: a stocking-filler of a game that is built around some multiplayer fun, and priced appropriately.

Unlike most games produced entirely to capitalise on Christmas, Q Force has the backing of a very popular mascot, and is anything but shovelware. The game is limited compared to a full Ratchet and Clank title, but it’s well worth the purchase nonetheless.

The game is on the surface similar to previous games in the series. There’s tight 3D platforming, there’s the typical sense of humour and the usual characters all put in a show. Where Q Force differs is that it introduces a tower defence element to the game. As you’re exploring each level, periodically waves of enemies will attack your base. You can defend it personally (and levels are strewn with handy teleporters to get you back in a snap), but that’s not going to be enough. You’ll also need to build turrets and the like to protect the base. 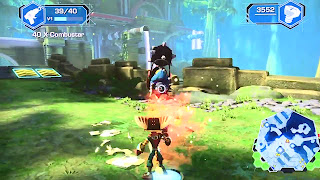 These towers cover the typical range of tower defence types. There’s mines that slow down enemies, powerful-but-slow shooters and so on and so forth. There’s not a huge range of them to choose between, but the placement of those towers is just enough to give the game a welcome dash of variety.

Tower defence games are typically quite challenging, and Q Force is no different. Thankfully there’s an online or split-screen multiplayer mode to give people the opportunity to buddy up to get through the tougher challenges. Online multiplayer works fine, but the real fun of this game is in sitting in the living room and working together. Maps are designed around this co-op format. There’s typically two entrances from the base which enemies will attack simultaneously, and enemy patterns work best when tackled in teams. It does make things feel unfair in single player at times, but it hits all the right notes when a friend joins the party.

The game looks good and has the kind of humour that will appeal to both children and adults. In other words; there is nothing wrong with this game. It was clearly built quickly and on a small budget, as the whole experience is limited (and over very quickly indeed), but given that it also costs peanuts at retail or off the PSN, then this game achieves what it set out to do admirably: be stocking filler. Given that you’ll also be able to unlock and play the game when it releases on Vita next year by buying the PS3 version now, there really is great value in this package.