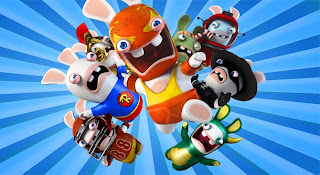 It’s a risky move bringing a multiplayer party game series to handheld consoles. Games in these franchises are best played as a group of family or friends sitting around a TV. Handheld consoles generally suit either a single player or online multiplayer experience.

So there’s a disconnect with handheld multiplayer party games that has meant that series like Mario Party and the Rabbids games have struggled for traction in the past. Thankfully Rabbids Rumble has successfully figured out how to resolve this disconnect, and offers up a fine single player game.

As with almost every other Rabbids game out there, Rumble is filled with gimmicky little mini games that put more effort into being ‘zany’ that presenting deep mechanics. In Rumble you’ll be using AR cards, gyro controls, the microphone and the touch screen and buttons in various scenarios range from basic rhythm games to navigating through trap-filled mazes, to firing cows at archery targets. Each minigame lasts for a minute, if that, and players are graded based on hitting various score targets. 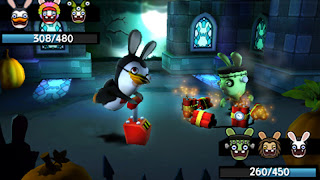 It’s a little easy to get the high scores but frankly that’s just as well because the replayability of these minigames is next to zero. Once you have played each minigame once you’re seen everything it offers. So far all of this should sound typical for a Rabbids game, and that’s because it is very standard Rabbids game material. Thankfully, Ubisoft has in its infinite wisdom thrown in a Pokemon-style RPG system between the minigames that helps extend the value of Rumble significantly.

There’s around 100 different rabbids to collect, each with their own special abilities, strengths and weaknesses. Each can be levelled up to level 10, and each has three different abilities – a regular attack, a special attack and a defensive move. Each battle takes place between three different rabbids on each side. Beat a team of rabbids that includes one that you don’t have yet and you’ll get to “capture” it. Sound good? It is. It’s very (very) simple compared to Pokemon, but it’s addictive, and the range of rabbids on offer is truly wonderful. 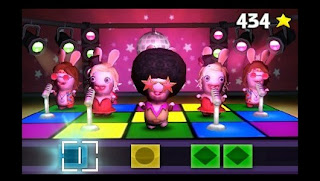 You can also take the game online for these battles. It’s a little too simple to pull off long-term value, but it’s fun enough for long enough to be a nice addition to the basic game.

Collecting those rabbids aside this is, like most Rabbids games, not an especially lengthy package – and to be honest, collecting all 100 is not a particularly onerous task either. What it lacks in brevity it makes up for in humour, though. The Rabbids games have been consistently amusing to play – perhaps not laugh-out-loud funny, but the kind of slapstick humour that has remained endlessly watching since the days of Charlie Chaplin.

Like a good joke, perhaps, Rabbids Rumble does not outstay its welcome. In fact, I would argue it’s pitched perfectly as a “Christmas game” release – the kind of game you’ll by and breeze through without being too challenged, but having a great time in the process. And then it’ll sit on the shelf for six months until you pick it up again on a whim and get addicted all over again.

And so it’s meaningless fun, but it is fun.