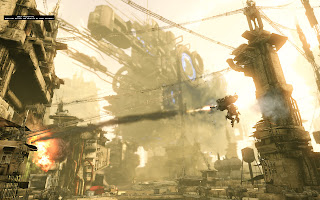 One of the most unexpected developments of 2012 is the surprising change of events for free-to-play video games.

It started with Blacklight Retribution in April, bringing an extremely fun and balanced military shooter to the meta-genre. Following that game less than a month afterward were Tribes Ascend and Super Monday Night Combat respectively, two high-quality games that added to the then-anamoly of polished free-to-play video games.

Prior to 2012, many video game players saw free-to-play games as Skinner boxes which only goals were to suck money out of the pockets of manipulable people. Now though, through the hard work of some talented studios, more and more players are seeing free-to-play games as what those games are; quality games that are free to play.
Hawken, a mech-piloting game from the California-based independent game studio Adhesive Games, is entering the free-to-play fray shortly. The question that Hawken is faced with is whether or not it can keep the momentum started by its peers to continue to show that free-to-play games are not masterfully-designed Skinner boxes. From what I gathered while participating in a closed beta, Hawken definitely shows it is not a pay-to-win nor a boxed game. 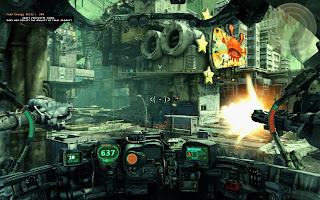 As all good properties involving mechs do, Hawken focuses solely on the walking machines of death. Players are thrust into an arena with their mechs and told to kill each-other or capture points while killing each-other. Mechanical violence is the goal of the game and Hawken provides an interesting framework for this destruction to take place.

The gameplay basis of Hawken is to kill other players by finding them in an environment and depleting their health bar to a big, fat zero before they do the same to you. It is not an original premise, but the way Hawken constructs this gameplay is worth taking note. As mechs are front-stage, a lot of gameplay decisions are based around that centerpiece. The downside of carrying two independently-controllable armaments simultaneously and piloting a three-story tank is that those tanks move and turn slowly, with only boosting and hovering functions counteracting the slow speed. The game also allows the player to repair their mechs, making damage non-permanent.
Although the game is not advertised as such, Hawken is very much a game based around mech duels. The slow movement and their large health bars makes the walking tanks impossible to kill with a clever shot and impossible to use for hit-and-run tactics, allowing for players to recognize their attacker before their machine is completely destroyed. This gameplay dynamic is vastly entertaining as many of the game’s mechanics compliment the dueling. The two fast-movement options, hovering and boosting, can be used to dodge projectile-based missiles if used at the right times. The weapon overheating mechanic encourages being smart with weaponry rather than reckless or playing the game as if it is another competition of cursor placement. The additional items that can be deployed help an individual face a single opponent and give them a slightly greater chance at winning that particular duel. 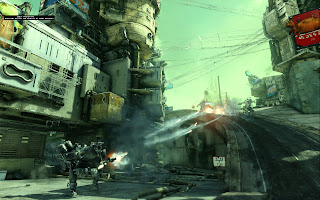 One aspect that many people would view as going against the dueling nature of the game is the leveling system. Hawken uses two types of leveling in which players can increase their mechs; skill tree point distribution and linear level progression.

Every time a player gains enough experience points to level up, Hawken rewards the player with one of two prizes; a bundle of three tech points or a mech upgrade from the linear progression tree. The tech points can be used in a series of three skill trees, aptly labeled ‘Offensive’, ‘Defensive’, and ‘Movement’. Within each tree are several specific upgrades, with more unlocking as more points are put into the available upgrades of that tree. The upgrades themselves pertain to things like weapon damage, reduction in overall damage, and boosting speed depending on tree. While these upgrades do affect important aspects of the game and the leveling rate can be upped through XP percent increases which can be bought in Hawkens cash shop, rarely any combination of upgrades yield more than a 15 percent increase in any individual mech skill. While this fact can make the tech points feel unimportant, these very small increases in skills still give progress and do not tip the balance of winning into the hands those with more money.
The mech upgrades range from overall mech performance increases to individual weapon increases. At least, that is what I believe the upgrades do be. Names like “Primary Weapon Level 2” are so vague and come with no attached descriptions that the player is left to wonder what the upgrades actually mean.
The graphics of Hawken are a mixed bag. The individual models and textures of Hawken look absolutely fine, with the high-detail settings making the game really pop out as fantastic. However, the overall gray color pallet make distinguishing enemies hard to do if they have not been pointed out by the in-game targeting system. And for a free-to-play game, the minimum requirements are surprisingly large, with many non-current graphics cards only being able to run the game at a solid 60 FPS by turning down every graphical option.
Looking at the overall packages, Hawken definitely does keep the momentum that has been set be previous free-to-play games that have been released throughout 2012. Despite the game being available to all on December 12th, Hawken will still be in beta and will still have changes being made to it long afterwards. Hopefully Adhesive Games can address several of Hawkens issues between now and the time in which Hawken will be considered complete.