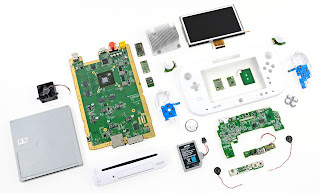 Nintendo’s Wii U has launched and the “gloom and doom” articles are just as abundant as with much any other hardware release, but you can rest assured, this is not one of them.

I’ve been carefully watching events unfold, enjoying the criticism as I always do, yet with this system there’s been something different – something just doesn’t ‘feel’ right this time around. I’ve been hard at work, searching though countless articles both recent and past and I think I just might have picked a few truths from the mounds of articles that amass each day in the world of gaming journalism, and I think I might have just found the needle hidden within the haystack.

Let’s start with two articles I’ve came upon across at Now Gamer. In the first one, Wii U is being sharply criticised by the developer of Metro: Last Light, 4 A Games, stating that it “has a horrible, slow CPU.” Then in a second article, this same notion was shared by one of DICE’s developers (famed for its Battlefield series) when he made the following statements, which I’ve listed exactly as he posted them on Twitter:

“I don’t actually know what makes it slow, but enough “tech” people I trust in world are saying the same things.”

“GPU and ram is nice to have shaders/textures loaded. Physics and gameplay run on CPU mostly so player count is affected etc.”

“This is also what I been hearing within the industry, to bad since it will shorten its life a lot when new gen. starts.”

With two developers from studios that are held in high regards speaking out, I became intrigued to know more. I find that many people seem to loathe Nintendo and find enjoyment in predicting its imminent failure. These are arguments I won’t involve myself in and it won’t be found here at Digitally Downloaded either. There’s big interest in Wii U and a recent post at Nielsen shows that the only things more requested than the Wii U this holiday season is tablets and computers – most notably being Apple’s iPad.  It’s well-known that the Wii didn’t need high-tech processors to send it to the top spot on the console charts – where it still remains today – and Nintendo’s first party titles will alone sell its system. It’s here though that I find that the majority of journalists have seemed to settle down with Wii U’s power issues. But not me, I needed more pieces to fit together before I could feel settled myself.
So, I turned to Wii U’s system specifications for clues. A post at NeoGAF listed the RAM speeds for the Wii U after PCPer  posted a fantastic teardown of their Wii U on launch day and came up with that the Wii U has an estimated 17GB/s of DDR3 memory, with a substantial amount of eDRAM, which the total amount of is not yet known and could change things for the better. To put this into perspective with the current generation consoles, the Xbox 360 has 22.4 GB/s plus eDRAM for frame buffer, while the PS3 has 25.6 GB/s main memory BW + 22.4 GB/s graphics memory BW, no eDRAM. For the top end of the spectrum, the GTX 680 (likely what 4 A Games is using to develop Metro: Last Light on for PC) clocks in at a whopping 192.2 GB/s. While I’m not the savviest when it comes to the world of technology (I’d much rather just play games), it’s easy to see that Wii U is either on par, or a bit below the current generation of HD consoles. These numbers are also being based off of raw speed too, which does not equate for the power lost to stream the games from the console to the GamePad, which is indeed going to be a major factor into the equation.
But, hang on just a minute – what happened to the “Wii U is 50 per cent more powerful than the PS3” statements we were hearing just a few months back? Was there really nothing factual in all of those speculations? So it’s here again that I’m sitting on loose ends and I had to dig even deeper to find a bit more truth to the matter and one I was going to have to go beyond the system’s RAM speed.
So let’s go back to those “50 per cent more powerful” arguments – shall we? It didn’t take long to find the ‘unconfirmed’ system specifications for the Wii U that were floating around just a few months ago and it’s here where I think I’ve found my needle that’s been hiding inside the haystack. See, it was rumoured that the Wii U would be running on a downscaled, tri-core version of IBM’s POWER7 architecture, which would indeed prove the system to be about twice the power of the current generation of HD consoles. But, what is inside of Wii U? Well, we know that it’s a new POWER-based IBM processor, but an IBM tech clarified on Twitter that it most definitely not based on the POWER7 architecture. Months ago rumours were floating around that it was based on a faster clocked version of the “Broadway” processor that’s found in the first generation Wii, which is something that I’ve seen come up in numerous conversations with interested tech savvy types over the past two days.
In my research here, I stumbled upon something else too, and it’s one that I don’t recall reading at the time that it came to fruition. Just a month ago, Eurogamer was researching just this subject and they went to a developer that could prove if Wii U’s processor is indeed lacking – Omega Force. The “Warriors” series is known for straining hardware, because of it rendering thousands on enemies onscreen at once, and with them bringing Warriors Orochi 3 Hyper to Wii U at launch, they’d surely have some answers – they did too. In their interview with series producer Akihiro Suzuki, he had this to say:

“One of the weaknesses of the Wii U compared to PS3 and Xbox 360 is the CPU power is a little bit less,” he said. “So for games in the Warriors series, including Dynasty Warriors and Warriors Orochi, when you have a lot of enemies coming at you at once, the performance tends to be affected because of the CPU.

“Dealing with that is a challenge.”

But Eurogamer went on to state that, “one of its [Wii U] strengths is said to be its custom AMD 7 series GPU, and the 1GB of RAM available to games: double that of the PS3 and Xbox 360.” This means that there’s definitely some leeway for developers to push the system a little bit further and maximise its performance – a great thing for Wii U.
What does this mean for Wii U? Well, to put into perspective for you, it means that Wii U is very likely a “current generation” console from a technical standpoint and the reason behind the performance issues found within several of the multiplatform launch titles. This also means that there’s a real possibility that Wii U could potentially miss out on (or receive stripped down) key multiplatform titles once Microsoft and Sony’s next generation of home consoles land on the market. We’ll officially know more once the complete rundown of Wii U’s specifications come into light, but it’s pretty cut and dry to see that if Wii U is already struggling with current generation titles, it’ll continually worsen going forward.
But this all seemed to be conflicting with a headline I’d read yesterday – didn’t the President and Chief Operating Officer at Nintendo of America, Reggie Fils-Aime, make the claim that “Wii U is absolutely the beginning of a new generation?” Yes. He did indeed make just this statement, but you’ve got to read it in its full context to understand what exactly it is that he’s stating:

Does he state that “the Wii U is the most powerful home console on the market?” No, he does not. He instead states that Wii U is the beginning of a “new generation” of home consoles, not the “next generation” of consoles. He’s stating that Wii U offers something different from its competition, just in the way that Wii before it did. While I do place some blame on Nintendo for misleading people to believe that Wii U will be capable of handling multiplatform titles that’ll be developed for Sony and Microsoft’s next generation consoles (with snappy statements just as this one), by only beating around the edges of the subject and intentionally hiding the system’s specs. I do think that those looking to only purchase one next generation console need to weigh in these findings accordingly, as it could truly affect your enjoyment with the console a few years down the road.
As we come to our final conclusion – what does this all mean for the future of Wii U?  Should this change your decision to purchase the system? In my opinion, Nintendo does what they do better than anyone else in the business and that’s just being Nintendo. Their games reflect everything that’s good about gaming and you can be assured that their first party titles alone will make creative use of the system in ways that no other system can replicate and make the system worthy of its purchase price. Also, independent and third party developers are already showing support for the system, but it is (as I’ve previously stated) a possibility that it could miss multiplatform titles in the future. So if you’re a fan of what Nintendo brings the table, there’s absolutely no reason to skip out on Wii U, but if you’re just wanting to get a jump on the “next generation” of home consoles, it would probably be a wise decision to hold off on a purchase awhile longer to see how Wii U compares to its future competition; patience is a virtue.
Share this