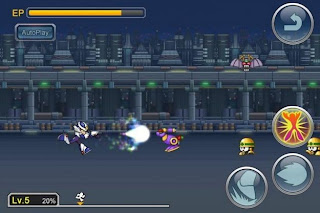 It seems like Capcom has managed to find itself in a spot of hot water over its Mega Man franchise again. This time, it’s over the release of a social iOS game that ties in with the franchises’ 25-year anniversary.

Now, on one level I do get that frustration. Compared to, say, Square Enix and the way it celebrated similar milestones for both Dragon Quest and Final Fantasy, releasing a game on a platform that most of the diehard Mega Man fans would never dream of touching would seem like a slap in the face. Far be it for me to criticise fans for getting upset over that.

However, would it really kill people to play a game before judging the quality of the game itself? This news report makes it quite clear that the author has judged the game not only before playing it but on the basis of a brief demonstration of one of the earliest levels in the game. The video that the article links to quite clearly shows “level 1” in the top left corner – the game has just started. And yet according to that author “brief look at a gameplay demo shows that there’s hardly any skill required anyway.” The last I checked most tutorials involve hardly any skill, and this is the equivalent of judging a game based on its tutorial. That the person writing the criticism of hadn’t personally played.

I’m not saying it’s going to be a deep game, but people really do need to reserve their judgements of games until they’ve had proper hands on time and can make a fair assessment of the merits of the game, rather than its premise. This attitude echoes criticisms of other games that I’ve seen in the past, such as Silent Hill Book of Memories (it’s not a survival horror game? Terrible game!) and Metal Gear Rising Revengeance (it’s not a stealth game? Blasphemy!) – and a host of others from even further back (Devil May Cry remake, anyone?). It baffles me that people will hate a game they’ve had no experience with. Silent Hill and Metal Gear Rising are both great games, by-the-by, and the developers of Devil May Cry’s reboot have yet to put a foot wrong.

Some of the best experiences in life are those that we didn’t necessarily see coming. I had always dismissed the Warriors games out of mind on the basis that they were, apparently, ‘button mashers.’ I hadn’t played them before, but that’s what everyone said about them, and they got such low scores in reviews. But one day I picked up a copy of Samurai Warriors 3 on the Wii and I have bought (and loved) every Warriors game since then.

Likewise, I thought social games were silly time wasters, but then I found one I liked, and it no longer mattered that it was a silly time waster – it was fun, and I enjoyed it. From what I can tell there is no reason to think this Mega Man social game is any different.

But it seems we live in an era where it’s easier to simply judge a game on the basis of the idea behind it, without giving it a fair shot. This Mega Man Xover game might well be a lot of fun – social games can be fun, and indeed Capcom has shown it has talent with social games in the past; that Smurfs game was ace.

Of course it’s not a traditional Mega Man game, and as I said before, I get why that is disappointing. But dismissing a game out-of-mind for the simple fact that it’s a little different to the traditional games in the franchise? That’s just not on.