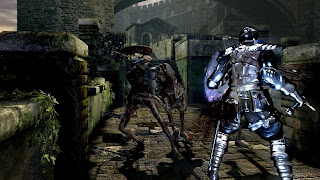 The Dark Souls community has recently confused me. I’m sure most people who regularly read gaming news would have noticed this but there was a bit of an uproar over the very thought that From Software was considering implementing an “easy mode” into Dark Souls.

The uproar was around how an easy mode would ruin the “purity” of the game’s vision, because the mere existence of an easy mode meant that the “pure” normal mode was ruined, or some other equally silly rationale. But that’s not what confused me. I do understand that people that really love a game (or game series) don’t necessarily like it when developers try and make their game more accessible. There’s a certain sense of pride in belonging to a small, dedicated community, and no one wants casual players messing with that sense of community. I don’t necessarily agree with it, but I understand it.

No, my confusion stems from something else – these people don’t seem to realise that Dark Souls is almost a painfully easy game. Let me explain (before you head down to the comments to troll away); it’s not that I’m a super-soldier gamer that ran through Dark Souls in one go. My avatar died a lot of times on the way to completing it like most people’s. No, the reason the game is painfully easy is simple: it’s almost impossible to fail at Dark Souls. 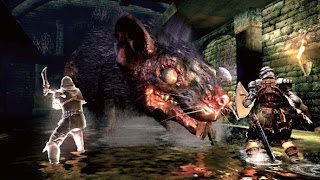 Dark Souls, like Monster Hunter and a select handful of other modern “hard” games turn avatar death into an integral part of the game. Yes, there is a lot of trap-based death and titanic monsters capable of one-hit killing players, but each death at the hands of these mechanisms yields experience. Not in-game statistics, but real-world understanding that help get you past the obstacle the next time. In other words you’ll avoid that deadly falling rock trap next time or you’ll understand the monster’s movements and successfully take it down. What was previously impossible becomes manageable and even easy. It might take a hundred or a thousand times to get even one metre further on in the game, but with persistence it will happen.

Now, you could say that this has always been the way with games. The original Super Mario Bros or even something like Nethack are of course incredibly difficult games, and just like in Dark Souls, it’s possible to memorise routines understand the mechanics and learn how to time jumps or attacks.

The difference between those old school games and Dark Souls is the fact that it’s possible to fail at the old school games, but Dark Souls never hands players an “F.” There are three little Mario lives at the start of Super Mario Bros, and aside from picking up a new life through coins or a rare mushroom, that’s all you’ve got. Run out and it’s back to the start of the game. A game like Nethack’s the same. You could be deep into level 20 after weeks of dedicated playing, and BAM! One wayward spell and it’s Game Over. Both games have told you in no uncertain terms that you’ve failed, and so those lives become precious resources. 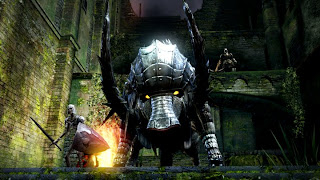 In Dark Souls, life is not a finite resource – it’s a readily replenishable learning tool. There’s no real fear of death – in fact, often when I arrived at an area I was not sure about I would go on a sprint around the area. It’d draw the attention of so many enemies that death was inevitable, but it gave me a better understanding of the layout of the land for my next attempt.

Similarly, every time I went into a battle with a boss demon I would use the first couple of attempts to simply block ad dodge as much as possible before dying for the sole purpose of learning his attack patterns and prepare myself for the “riskier” attempts where I would counter-attack. I would die, and be whisked back a short distance to a campfire ready to start anew. Yes I would lose some souls and other powers that I’d built up, but those could be re-earned through some grinding. That is of course time-consuming and I’m sure Dark Soul hardcore veterans would have more effective strategies than I, but I had no fear of a “Game Over” and so Dark Souls was testing my perseverance, not making me sweat on my decisions.

In an interview with From Software in Edge Magazine for Demon’s Souls (the spiritual prequel to Dark Souls), the developers mentioned that originally they had toyed with the idea of having permadeath in the game. That would have made the experience genuinely difficult, because it would then have been possible to fail. 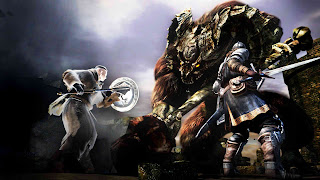 But it didn’t happen, so the Souls games instead cultivate a careful perception of difficulty without actually being difficult – once you realise that death in the game is actually a positive learning process and not a punishment you realise that Dark Souls like most other modern games exists not to challenge players, but to be experienced and, yes, completed.

So let the people with less time or patience have an easy mode, if you ask me. It compromises the Souls vision none whatsoever.