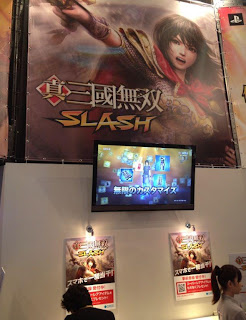 As anyone who knows me knows, I’m a big (understatement) fan of Tecmo Koei’s Warriors games. I just have to play every single one that is released, and to date, the iPhone and the iPad have been my own gaming devices Warrior-less.

That all changes today. In Japan, Dynasty Warriors Slash has just been released. We know this thanks to Tokyo Game Show, with this sole teaser shot.

I know absolutely nothing else about the game at this stage, but rest assured I will be grabbing my iPad (the one tied to the Japanese App store), and putting this game through its paces.

My bet is on it being a Fruit Ninja clone.

RAW is the Xbox Live Update

Trailer: See lots of Totori on her Vita outing