Do you ever crave a good retro shoot-em-up? The feeling of blasting space foes into pixels with your trusty space blaster. Originally released on the SNK back in 1989, The Next Space provides the endless fun of arcade shoot-em-ups in the palm of your hand. Now rereleased as a PS Mini for the PSP/PS3, does the game still hold up today?

The gameplay itself is very simplistic. There are only two buttons used: X allowing you to shoot your stock standard weapon, with O allowing you to unleash the fury of the special you have picked up. The specials are labeled by letters, with each offering you a different form of attacking the enemies. By shooting the power-up orb, you are able to change the special that you will get. C equips you with a deadly flamethrower whilst G attaches homing missiles to your ship. 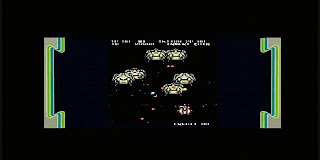 Death is common, with one hit being enough to blow your ship up. Death only brings with it a score reset and the loss of your power-up. The power-up isn’t that big of a deal as orbs are in abundance. Also, unless you have amazing self-control, you can pretty much avoid getting a game over as you can willingly add virtual coins to the virtual arcade cabinet whenever you like with a press of the triangle button.

The Next Space offers a two player mode, however I was unable to try this mode out.

The graphics look really crisp when playing on a HD television and the sound is a great throwback to days of old space shooters.

All in all, The Next Space is a great throwback to those who grew up on the likes of Galaga, and for such a low price, it’s an absolute steal. Although over twenty years old, The Next Space can provide hours of space-shoot-em-up fun.