One Epic Knight takes on a never-ending dungeon in this new endless runner for iOS. One question, how does he manage to move so fast with all the armor?

Regardless of weight issues, Simutronics’ One Epic Knight is actually a pretty fun time. I have to admit, I’m not really much of a fan of the relatively new ‘endless runner’ genre. It always seemed like a kind of empty experience, but the more I play of them the more I see them for what they are – a fantastic mobile experience.

In general, runs don’t take all that long (not long at all, if you aren’t quick with a swipe) and endless runners are perfect for wasting a few minutes here and there. They’re even fun for the occasional ‘session’ as getting as deep as you can into the level and setting new personal scores and what the game will throw at you next is a pretty good time.

The controls of One Epic Knight are simple fare, which is great for a game like this. Swiping left or right moves or turns in that direction, swiping up jumps, and swiping down slides. Easy stuff that works pretty well. It did take me a few minutes to get the timing right when I started, but once I did it couldn’t have been easier.

You won’t just be running though as you can also pick up items in One Epic Knight. Swords, shields, and special pieces of treasure are scattered about the dungeons and can be grabbed by running over them. Once you have a sword for example, you can take out an enemy that stands in your way (and grab the loot he guards for yourself) instead of running around him.

The level itself gets more and more tricky as the knight runs too. When you start out, you might not find more than a few blocked passages and blobs to deal with, but keep the run going for a while and you’ll have all manner of stuff to deal with. There’s also has a kind of achievement system and it awards you with all kinds of little messages and bonuses for doing different things in the game. It’s a solid idea as it actually gives you a reason to keep playing. 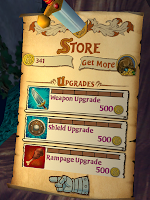 Helping to keep your attention as well are the graphics, which are pretty nice to look at. While there isn’t really anything too spectacular going on here, the game is pretty polished overall. It has a cartoony look with a super-deformed character style and a setting that looks like it would be right at home in Azeroth. The dungeon changes from playthrough to playthrough, but it always looks good and never seems like it’s ‘sectioned’ or otherwise pieced together.

I did find on occasion at the jumping distance was a bit tough to negotiate. I found I couldn’t really see where it was that I had to land sometimes. This wasn’t a consistent problem (I attribute it to the randomized nature of the game) and didn’t detract all that much from the experience. It was a minor annoyance at worst.

One more thing I have to add in here is that I loved the voice for the Epic Knight himself. I don’t even really know the best way to describe it… dude-like, I guess? Whatever you want to call it, he comes out with some really funny lines; the little guy had me laughing out loud more than a few times, especially when he crashes into stuff.

And I crashed into plenty, by the way. One Epic Knight does most things right and keeps the gameplay simple and fun above all else. I had a great time with it and I don’t doubt that it won’t stay on my iPhone as one of those ‘never delete’ Apps.