NBA 2K basketball has been the top hoops title for some years now, but instead of sitting back and taking it easy the last few years, the series has generally made some really impressive strides instead.  A couple of the more interesting and talked about features was the inclusion of Olympic Dream Teams. 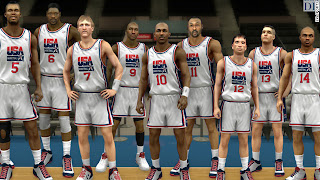 After Kobe Bryant made a remark that he felt this year’s Olympic team was capable of beating the famous 1992 Dream Team, quite a firestorm of debate kicked up between fans and even members of the original Dream Team.  It made for interesting speculation, but obviously no one would ever know for sure.

Then 2K Sports decided to include both squads and let gamers duke it out and decide for themselves.  This is slightly older news from a couple of weeks ago.  Perhaps the most glaring omission was that Scottie Pippen from the original 1992 team had said he would not allow his likeness to be used in the game, but he has since decided to relent on the topic and now it has been confirmed that he will in fact be in this year’s title.

I think that is all well and good, and should make for a fun match or two, but I am much more interested in the other announcement that 2K Sports has made, which was that they would be including All Star Game content.  In the past versions, an All Star game was played every February, and it was nice that the teams were generated based on player popularity and in-season performance, but you got the showcase game and nothing else.  Well this year promises to have more events you can participate in, and 2K Sports just put up a trailer video that you can check out below.

I am pretty excited about this year’s title, which is shaping up really well so far in my opinion.