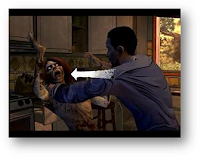 Not running too far behind it’s console siblings, which are only on ep2, the iOS version of the Dead makes it’s shambling entrance onto the App Store with the game’s first episode- Brand New Day.

Players take the part of main character Lee Everett in an adventure that starts before the TV show and comics ‘hero’ Rick Grimes’ story even begins- so it’s kind of like a prequel of sorts. Lee is a convicted killer when BND starts, whether he actually did it or not (and what kind of man he really is) isn’t a hundred percent clear. When the zombie apocalypse breaks out, Lee gets a second chance of sorts.

The Walking Dead is most definitely an old school graphic adventure game at heart. Basically, you point and click (or tap as the case might be) to move around and interact with the game world. What really sets it apart from everything else in the genre though, is its action and choice system. The game moves fast and things that you do, or don’t do, will come back to haunt you later on. 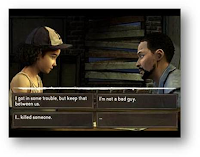 Episode 1: A Brand New Day is available now for $4.99 USD and can be had by clicking here. Parts 2-5 will become available periodically and can be bought right from within the App. There’s also a bundle that you can pick up right now too (also from within the App), that’ll get you cleared for downloading the rest of the episodes (as they’re released) and save you 25% off the total price. That’ll cost you $14.99 USD. And it’s well worth it.

We previously reviewed both Brand New Day and (second installment) Starved for Help in their Xbox Live formats. Both parts of the five episode game are excellent and definitely worth your time if you’re a fan of the property or not. All in all, Telltale’s most gruesome adventure to date is shaping up to be a legit game of the year contender.