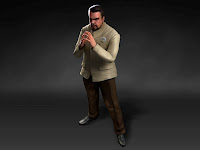 Activision has a small army of Bond series vets onboard for this Fall’s 007 Legends game. Get ready for some familiar faces (and tunes).

Legends ties together six different Bond adventures from throughout the character’s massive catalog of movies. All together there’ll be five ‘in the box’ plus a free downloadable SKYFALL mission post launch. All five will also be suitably updated and modernized to better fit in with the current Bond, Daniel Craig.

So with that, you might be able to tell that Craig will indeed be lending his voice and looks to the game- but he’s not the only one.

Activision announced today that the Moonraker level will feature both the main baddie Hugo Drax (voiced/faced by Michael Lonsdale) and his lackey- the super strong Jaws (portrayed by Richard Kiel). In addition, actress Naomie Harris (from the new Bond film SKYFALL) will also be making an appearance and the publisher promises that even more talent from past movies will be announced as more of the game’s settings are detailed.

But wait- there’s more! (I did say ‘army’ remember?) The new backstory (that links everything together) is being penned by Bond movie and game scribe Bruce Feirstein. He wrote the scripts for The World is Not Enough, Tomorrow Never Dies, and Goldeneye– my personal favorite 007 flick. Providing the musical accompaniment are composers David Arnold (Tomorrow Never Dies, Die Another Day, Independence Day) and Kevin Kiner (Hell on Wheels, Star Wars: The Clone Wars, CSI: Miami).

007 Legends shakes up retail shelves and download services (like a martini!) on October 16th for the Xbox 360, PS3, and PC.

The weekend discussion: The Olympics!