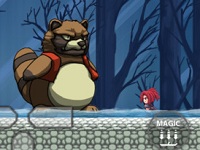 Way, way back, our (then new) editor, Clark, wrote one of his first reviews for Digitally Downloaded: a little indie game on XBLA called Akane the Kunoichi. He rather liked it, and now it’s finally on the other great indie platform, the iOS App Stores.

This is a good thing because it means I can finally play it (XBLA Indie Games never came to Australia). So this is delayed, but – Clark, I completely agree with you.

While Akane the Kunoichi looks like it was made on Game Maker (in fact; was it?), it’s a game worth the tiny asking price for a very simple reason – the level design is *fun.* Short and sharp, the winding 2D platforming labyrinths do a great job of mixing up difficult acrobatic challenges and exploration. Enemy players are placed just perfectly to ensure you need to stay on your toes throughout each of the levels, and there’s three kimono pickups to track down for the completionists. 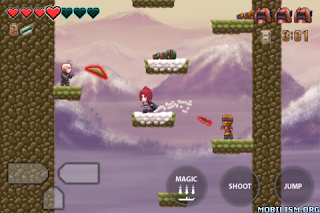 The game plays very simply with nothing more than a jump and a fire button (well, there’s a ‘magic’ button too but that’s just another, powerful, attack), and this is just as well, given we’re talking about virtual buttons here. Those virtual buttons are responsive and the game controls well, but this is one of those games I rather wish was compatible with the 60beat controller. Later levels get very challenging, and even the occasional accidental death can be frustrating.

While I obviously haven’t played the XBLA Indie original, I suspect that the iPad version is a straight port, and that perhaps was a mistake by the developers. Other difficult platformers – such as Shantae and the upcoming Super Meat Boy – have been adjusted to be less reliant on pixel perfect jumping, to compensate for the difficulty that many find when playing games on iOS devices. Akane doesn’t feel as natural to play on the iPad, but that said, a little practice will get people through to the end.

The occasional boss battle breaks things up, though thanks to the basic nature of the controls, the tactics for beating those bosses tend to be very straightforward. While the game doesn’t look like much, the music tends to be cheery, just like the good old games from yesteryear.

There’s not much else I can say that Clark didn’t cover off in his previous review. Though the iPad optimisation isn’t there, Akane is a game that works better as a portable title, and it’s a small, cheap download that’s good to have on the iPad for those moments of downtime.