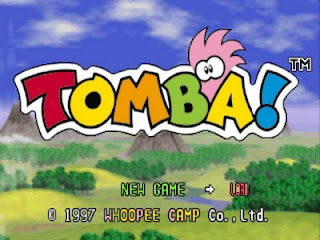 MonkeyPaw has been bringing various PlayStation One titles to the PlayStation Network for a while now. We first started covering these games a year ago, with the likes of Yakiniku Bugyou and Rapid Angel, but now the big kahuna is here. Yes, the publisher’s most requested game, Tomba!, has finally found its way to digital platforms. Originally produced by the now-defunct studio, Whoopee Camp, it’s a game well worth that exclamation point in its title (especially due to how much money copies of the game sell for today).

The story revolves around our titular pink-haired protagonist seeking revenge upon some particularly mischievous pork. The evil pigs have robbed Tomba of his grandfather’s bracelet, so he seeks to defeat them by collecting the appropriately named “Evil Pig Bags” to lock them away and retrieve his valued possession. Along the way, he’ll run into old men, dwarves, and various other jungle dwellers that help him along the way. It’s not the most compelling story in the world, but it’s silly enough that it works.

As far as platformers go, Tomba! is fairly original. The game takes place in a various free-roaming 2D platform levels. Tomba comes initially equipped with the standard jump as well as a ball-and-chain attack for aerial foes. He disposes of enemies by riding them like horses whilst chomping before flinging them across the room. It’s quite a bit more satisfying than merely jumping on them.
While each “level” is largely its own entity, they’re all intertwined to form a complete world. That means there’s a lot of backtracking required for collecting old items and completing quests. One could liken it to the more open entries of Castlevania or Metroid franchises, but even then those comparisons miss the mark; there’s nothing quite like Tomba!. 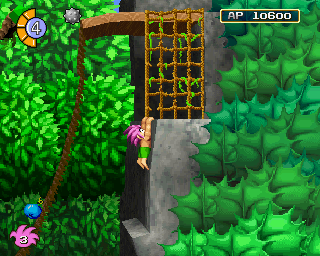 Further differentiating it is its emphasis on completing objectives and side quests. Quite frequently, you’ll find yourself just exploring a level before you stumble upon a strange object. Next thing you know, a quest is triggered and you’ve got to guess what to do based on the mission’s name. Completing said objective will reward you with AP, which can be used for a variety of things such as new abilities and access to special items.
There are also moments where Tomba enters villages in an overhead perspective. This enables him to chat with the local residents to find information regarding what action to take next. There’s not usually a lot to do here beyond finding quests or advancing the plot, but the change of perspective comes coupled with a change of pace.
The last of Tomba!’s major mechanics is its item system. As you find items and complete quests, your inventory will fill up with various forms of clutter. Some can be equipped to Tomba, such as a pair of pants that allow him to run faster or a boomerang that offers different control from your standard ball-and-chain.
My few quarrels with the game are minimal. Some of the solutions to the quests are as obscure as they come, forcing you to contend with trial and error or simply whip out that online walkthrough. Additionally, some three dimensional elements are thrown into the mix to enable certain mechanics, but most of the time it’s just for visual flair.
In fact, I’d wager it’s not a particularly good thing. Several times, I found myself unable to progress because something that looked like the background was actually in the foreground or vice versa. Early in the game, there’s a portion where it looks like the only way to progress is to swing from several branches in succession, with damaging ivy below you if you fall. One branch is placed just slightly out of reach, so naturally you keep attempting the jump and killing yourself in the hopes that the game is simply glitchy, before you realize the solution was to jump in what looks like the background. It’s not totally aesthetically broken, but may well have people scratching their heads at times. 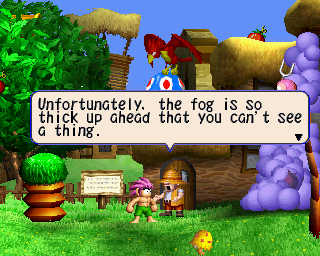 Conversely, the animated cutscenes have aged elegantly. They’re hardly the eye candy presented by an episode of Bleach, but they sure do showcase how powerful the PlayStation One could be. They are further enhanced by the inclusion of some voice acting every now and then (though the normal text features no voices).
Speaking of the audio, Tomba! is outstanding in that regard as well. Its soundtrack features a mix of seemingly jungle and ocean inspired tracks that set the game’s tone perfectly. It’s difficult to describe, in all honesty, but it works very well.
In terms of length, your mileage will vary greatly, thanks to the intricate puzzles. You can expect to complete the main game in about 10 to 20 hours, but completionists will see more time than either total. The amount of sidequests means you’ll never be at a loss for something to do (assuming you can actually find them).
Tomba! has a couple of niggles, but it’s largely a well-built platformer with plenty to do. Even at $9.99 USD (the more expensive price for PlayStation One games), it’s still well worth your dollar. If you’re burnt out on the platforming genre, give this one a spin.
-Clark A