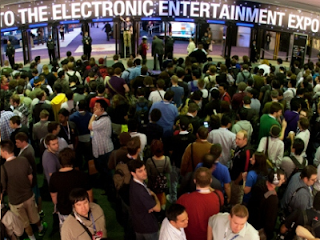 With the hype surrounding E3, an important part of the event is always absence from discussions; the ever-present Pre-E3. This is the name given to the preceding week of E3, where many games journalists are given early chances to get hands-on with the already-announced games of the show. While it allows early previews of games, this event also leads to several trailers being released. Digitally Downloaded has cobbled the more noticeable trailers together of the Pre-E3 event in this post for easier access.


War Of The Roses gameplay trailer

This is the most recent project that Paradox Entertainment has taken under its wing, with Fatshark being the developer. The game is quite interesting, as it is a multiplayer, team-focused melee combat game set in the age of knights. After thinking for a while, War Of The Roses is the first game of its kind, so the games success is completely up in the air. However, the trailer contains quotes from Eurogamer and Rock, Paper, Shotgun that appear to be positive, so there’s a good chance that it will end up on the good side of the video game spectrum. Also, the trailer contains heavy rock and knights in armor. Where is that heavy-metal CD cover?


War Of The Roses is planned to be released exclusively on PC in the third quarter of 2012. Knowing Paradox Entertainment, the game is most likely to be released digitally as well as in retail.

Being directed by the creator of Valve’s original Portal, Quantum Conundrum has a lot going for it. The game is a puzzle game where shifting dimensions results in changing the properties of specific objects, allowing for those objects to be manipulated. This pre-E3 trailer is a bit chaotic, as after the 45-second mark it starts throwing multiple screens at the player of varying size with no prior indication. If you look closely, you will notice to new features that have not been “Officially” talked about; a weight-increasing dimension and some sort of mechanical bird that presses a button which turns on a laser. While I know I will be picking up the game due to the its uniqueness, I hope the game eventually goes in the opposite direction of its warm exterior. The greatest part of the original Portal was after the 13 test chambers, where events got arguably more interesting.
Quantum Conundrum is planned to be released June 21st of 2012 and is already available for pre-purchase on Steam in both regular and “Season Pass” editions.
LEGO Lord Of The Rings trailer

The LEGO game series is still trucking along, but as of late the series seems to realize that it has worn itself out. LEGO Batman 2 plans to have Batman, Superman, and Wonder Woman teaming up against the Joker and Lex Luthor, while LEGO Lord Of The Rings is…well, Lord Of The Rings. There’s the chance that this could be a LEGO game that expands upon the tired gameplay, but as of right now there are no gameplay details about the title. Hopefully this will overcome itself and become something more than another LEGO game.


LEGO Lord Of The Rings currently is to be released in August of 2012 for pretty much every video game platform in existence.

Bohemia Interactive is back with its tactical simulation series Arma, and the game is looking as good as ever. The above video has quick overviews of many of the Arma III showcases that will be present at E3 proper. The showcases included are infantry, vehicle, helicopter, and night lighting showcases along with two that show brand new features to the Arma series; a diving showcase and a supports showcase. While very minimal combat was showed, the graphics of this PC-exclusive certainly show in this title.


Arma III is planned to be released exclusively on PC in the fourth quarter of 2012.

Being one of the most anticipated and original games of 2012, Dishonored is still looking to maintain that title. The pre-E3 trailer for this neo-Victorian steampunk action/stealth game is odd, beautiful, and action-packed all at the same time. Of course, it could also be called pretentious, but I like to remain optimism for new IPs, especially when they show as much promise as this game.
Dishonored is to be released on October 12th of 2012 and will be available for PC, Xbox 360, and Playstation 3.
Hybrid gameplay trailer
Rounding off this…round-up is 5th Cells new XBLA shooter Hybrid. The game combines cover-based shooting and free-flying combat into a 60 frames-per-second package. While the trailer is generic and does not highlight any specific features beyond mentioning them, the game does look like it will be a fun, fast-paced downloadable shooter. This game is also 5th Cells first foray into developing a game for non-Nintendo consoles and it will be interesting to see if they succeed or fail.

Hybrid is planned to be released during the Summer of this year (2012).

***
And that’s the end of the pre-E3 trailer round-up. Did we miss any trailers? Tell us in the comments section.
Share this