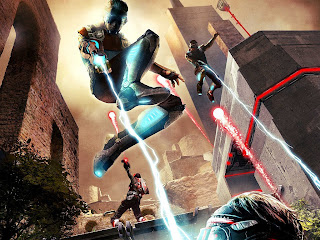 While being American, I do have a history of putting down games that contain meat-tanks which wield ridiculously-sized bullet dispensers and instead picking up something that’s been developed from the other side of the pond.

One of those times was when I started playing the racing game TrackMania Nations Forever, which latter led me to buy TrackMania United Forever on Steam. TrackMania was the culmination of simple yet complex gameplay; the controls were dead easy, but maneuvering the obstacles and learning how to overcome them in conjunction with the track design made the game hard to master. Not only that, but the huge amount of tracks and usually welcoming community kept me playing the game for a long time. NADEO, the creator of the TrackMania series, was able to strike a chord in the gaming community with its formula that kept us playing for a long time, and it looks like NADEO is planning strike lightening again in a different genre.

Just today NADEO released a 100 per cent in-game created and edited trailer for its first-person shooter entry of the ManiaPlanet project, ShootMania Storm. While somewhat-inaccurately titled an “Announcement Trailer”, the trailer does everything else right; it is directed amazingly well, the trailer hints at a bit of everything that is included in the game, and I haven’t stopped watching it for the past hour. Also, it avoids using dubstep! Well, not entirely, depending on your definition. Below is the trailer;
Shown in the trailer is expansive maps, special pads for a variety of functions, and huge/chaotic battles between blue- and red-coloured participants. Also featured in the trailer is a drum-and-bass song, NOT a dubstep song. While sounding similar, I am able to discern the difference with my superb investigating skills (read; the internet).
With the vague release date of “at the end of 2012”, ShootMania Storm will contain a map editor, custom scripting features, full support and control for dedicated servers, support for LAN matches, a country-based and worldwide rankings system, and a powerful replay-editing tool that was used to create the above trailer. Colour me excited.
Share this

Trailer: Magic the Gathering: Duals of the Planeswalkers 2013