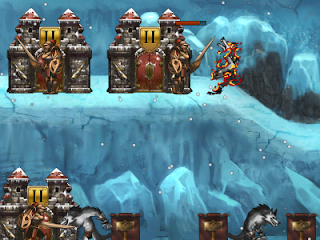 Despite its increasing popularity over the past years, I always approach tower defense games with caution, given how similar they tend to be to one another. However Defender Chronicles II seems to move away from the generic formula, fusing with the basic elements of a RPG.

A sequel to Defender Chronicles released in 2009, Heroes of Athelia introduces you to four heroes on a quest to save their kingdom. I didn’t play the first game so I didn’t know much of the story and if it continued on. Really though, I didn’t really care for the story as all it gave me was a block of text before a level then a few comic panels once I finished.

What I did care for however was the gameplay. The first level I felt was the basic tower defense level. There were just two units who could be upgraded to the point where you could just keep the game on fast-forward until eventually the waves finished and you won. Following this first level, the fun began. 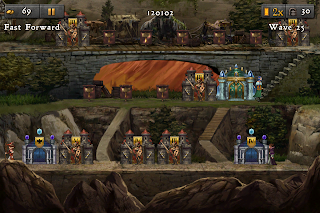 The aforementioned four heroes are your leaders. Each has their own abilities and fighting styles. I stuck with Melwen, a mage who was able to target a large amount of enemies, whilst also increasing the power of your troops. Along with Melwen, there was your stock standard RPG characters, the soldier, the ranger and then a hard-hitting elf.

When you finish a level, you gain points that you can use to upgrade your leaders abilities. Additionally you gain money, which can be used to upgrade your army. There are a six different shops tailored to all the heroes, however unless you look at the manual you’ll be scratching your head at what and who each shop is for.

And with this comes my major problem with the game. For the first few levels you don’t need a deep strategy to walk away with a win. However you’ll eventually hit a wall and unless you do read that manual, and you’ll struggle. At the same time, struggling in a tower defense game was something new for me. It motivated me to keep playing, even if it took me a lot longer to beat certain levels. 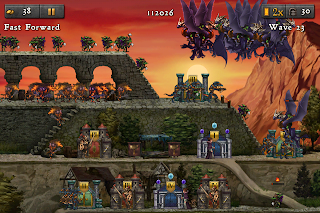 Another issue, although small, were the design of the maps. Multiple paths keep the action interesting and you will need to carefully think about where you place certain units, however they can at times be confusing. Your mission ends when a pre-determined number of enemies reach the ext, however the exit isn’t clearly identified, resulting in a frantic placement of units at the start of the waves.

The presentation though is beautiful. Everything in this game is just a wonder to look at, and quite a few times I was left reminded of the art direction in Nintendo’s excellent Fire Emblem games. The music is great as well, although if for some reason you don’t like it, it’s possible to switch over to play music from your iTunes collection instead.

I had a amazing time with this game, and it took me completely by surprise. The story is a miss and it could work just as well without it in there at all, but those who played the first entry in the series may enjoy it. It would have been nice to have an ongoing tutorial for the first few levels, introducing the characters to the various shops and the roles of your soldiers, as the manual doesn’t give the best explanations. Though, you cannot go wrong with a great hybrid of RPG roleplaying and tower defense, and all that is found in Defender Chronicles II.