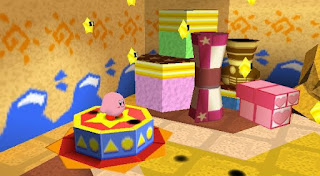 Many key Nintendo franchises made their way over to the Nintendo 64, bringing some modernization along the way. Rather than try to live up to the 3D overhauls made by Zelda and Mario, Kirby stayed true to the classic formula. Unfortunately, this also made for a very safe, if not somewhat uninspired platformer.
You’ll be instantly familiar with the mechanics if you’ve played any of Kirby’s main-series platforming outings. Kirby advances by trotting down the path to the right, while enemies try to make Kirby’s life more difficult. To defeat them, Kirby’s trademark sucking power comes in handy. Gulping up an enemy may also reward him with a new attack depending on the type of foe he’s digested. Kirby also comes equipped with the ability to float in the air. For some unknown reason, he can run out of breath in this version if he floats in the air too long, which forces him to come down to earth. Other obstacles include bottomless pits, objects that squish Kirby, and various level specific gimmicks.
What makes Kirby 64 stand out among the other titles is its unique ability system. Sure, you can absorb the same old fire and rock powers that have been featured in nearly every instalment, but should you feel adventurous, you can merge powers by throwing your current ability at an enemy. This results in all sorts of snazzy combos that give Kirby new attacks like light sabres or missiles. You can even merge two of the same abilities to form a stronger one; a normal rock Kirby becomes a colossal boulder with far better range. You can create a whopping 35 different abilities, so this system makes it worth changing and mixing your powers frequently. 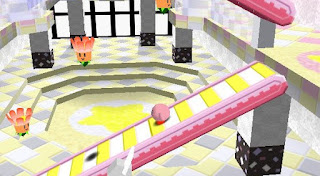 There are six worlds in all, usually with four “real” levels and a boss fight at the end. Even by Kirby standards, this does seem a hair too short. It doesn’t help that the series’ consistently easy difficulty level means you’ll plough right through the game in no time. Bosses tend to be way over on the easy side, with the final-final boss being the sole exception.
Once you’ve gone and completed all the stages, you may wish to take a second romp through the levels to find the titular crystal shards. There are approximately 75 in all, with three hidden in each standard level and freebies for boss battles. The majority can be found on your first playthrough, but a few rely on the use of enemy-specific powers so it’s not always clear what you need to do to access a shard that’s seemingly right in your grasp. If it weren’t for these pesky crystals, much of the game’s replay value wouldn’t exist.
By the way, don’t be fooled by the screenshots – this isn’t a 3D game in the slightest gameplay sense. Nevertheless, it’s a reasonably effective art style so long as you don’t expect Klonoa-esque freedom. The main character designs look fantastic, but it’s a shame the enemies didn’t receive the same level of attention. Much of the music seems to be remixed versions of past affairs, but it’s all very well done. Some of the new tracks are especially snazzy and would later be used again in other Kirby games…remixed! 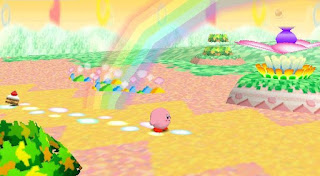 There are also a few multiplayer mini-games thrown in for variety. There are only three total, but if you’ve got friends around, they’re great fun. Checker Board Chase has players competing on an 8×8 grid, trying to knock each other off by breaking blocks. 100 Yard Hop requires quick thinking to decide whether to jump one or two spaces (you’ll fall in the water or bump into a frog if you rush). Last up is Bumper Crop Bump, which is a battle of who can collect the most fruit. Simple as these games may be, each one packs tremendous replay value and should go over well at parties.
Kirby 64: The Crystal Stars will inevitably have its fans and detractors, but it’s relieving to know most of the issues come down to opinion and the nature of the franchise rather than genuinely poor game design. This isn’t a title for everyone and certainly didn’t take the series into bold new territory, but Kirby fans should find something to like here.
-Clark A