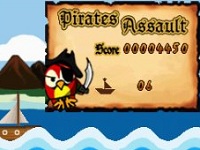 After reading Zane’s delightfully critical review of Defenders of Ardania, I’ve come to a conclusion about the guy: he has lived a very sheltered life. In giving a game like that a 1-star rating he has clearly not seen the true horrors of the games industry.

Because I’ve played Pirates Assault, I have been exposed to material that is so terrible in design and execution that I very nearly lost faith entirely in gaming over that 30 minutes it took to play this game to completion. So sorry you had to play Ardania Zane, but you actually got off light.

Like just about every other tower defence game, the point of Pirates Assault is to protect something using towers. In this case that “something” is a pile of yellow that I think it meant to be loot. In any given level (there’s a whopping five levels to choose between) the playing area is actually quite small, so you’ll have a brief second or two when the enemy pirate ships start appearing before they’ve grabbed your treasure. 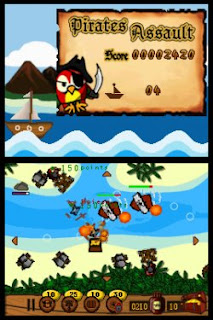 Now this is a problem because with most tower defence games the strength is in the strategy of carefully placing towers and reacting to what enemy waves you’re facing. With Pirates Assault there’s barely enough time to notice what kind of ship is attacking, let alone react to it.

Not that it would have been more interesting if the developers gave you an hour to prepare for each onslaught. There is just four defensive towers and although they can be upgraded that’s nowhere near enough. There’s just a handful of ships to face off against too, just to even out how lazy the game design is.

On top of that placing the towers is a pain, because there’s not real indicator where it’s ok to place a tower, and where it’s a no-go zone. So the only solution is, while these pirate ships are flying in thick and fast, to randomly drag the stylus around the screen hoping to find a safe building spot. The interface also happens to make it very easy to accidentally tap the “sell” button. Because selling these towers is exactly what you wanted to do when facing a wave of pirates.

But wait, it gets even worse! The game spams the tap-the-screen “feature” as much as Wii shovelware games spammed the waggle. Money is earned by rapidly tapping on rum-carrying boats. If an enemy pirate ship picks up your treasure what do you need to do? Tap on the boat five times quickly. It makes for a chaotic experience, but not exactly an enjoyable one. 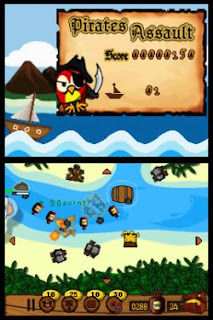 The presentation is terrible, like more of Circle’s games. There’s a cheapness to the graphical design and the music is a non-event. There’s no story to talk about whatsoever, but then I don’t think there’s a story on the planet short enough to fit the five levels the game offers. This review has more content than Pirates Assault.

It’s offensive that people have to pay money for this game. There’s free tower defence games that are a hundred times better than this, and there’s already some excellent DSiWare tower defense games on offer (Starship Patrol folks, everyone needs that game).