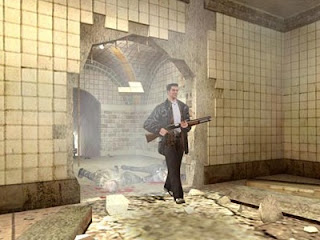 Clever marketing on Rockstar’s part: As Max Payne 3 approaches, release the original game on the iPad to remind everyone how awesome the series is. It’s a cheap, cheap game at $Au3, and it proves that action games can indeed work on the iPad’s buttonless screen.

So Max Payne is a real classic for a number of reasons, though the main innovation it brought into gaming was that bullet time effect. A simple tap of a button and everything slows down. Everything but Payne targeting sight, that is. When there’s enemies coming from all directions, being able to slow them all down and make an impromptu shooting gallery is not just cool-looking; it’s necessary for survival.

On the iPad the game is quite generous with an accurate auto-aim, though the higher difficult levels of Max Payne demand a great deal of precision on the part of the player as well. This is easy to accomplish thanks to some very well-designed virtual controls. Rockstar has already proven they understand virtual buttons with the rather excellent port of Grand Theft Auto 3, but Max Payne takes it to another level entirely – this is an exceedingly comfortable game to play. 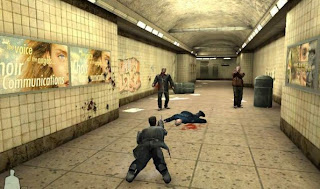 It’s also great to see that the iPad – even the original iPad – is able to handle the cinematic style that Max Payne is also so well known for. The grim, noire setting of the hotels, streets and train stations still looks great now, even given how old the code itself is. Each cut scene is played out through a comic-strip and it reads a little like a plot from Sin City. This is a decidedly adult game: the overarching theme is one of the drug trade, and there’s themes of prostitution and organised crime throughout. Like any great noire tale, Max Payne delves into the world of the most degenerate of humanity, and it’s a fascinating story to see unfurl.

Level design is largely linear, as with most of the games in the genre. Most of the settings of Max Payne consist of tight, enclosed corridors, but there’s a little more interactivity with the environment than we see in most modern games. TVs can be switched on and off, and players need to search health packs as there isn’t any regenerating health here. Unlike modern shooters, there’s also fewer set piece moments. Enemies tend to be encountered in small groups constantly, and as such there’s less of a feeling that the game is simply funnelling players from one “big moment” to another. 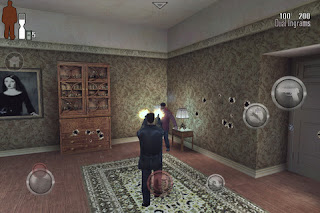 When the game was originally released on the PlayStation 2, Max Payne copped a fair criticism for being far too short, and it is; the game is over before it really gets kicking. This is less of a problem on the iPad, though, because it’s so cheap to buy in the first place. Really, the only problem with Max Payne is that it leaves players wanting more. So it’s just as well there’s a new game coming to the HD consoles, isn’t there?