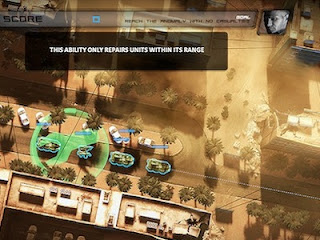 Anomaly Warzone Earth is a real anomaly to me. There’s been considerable hype behind the game as one that twists the formula of the tower defence genre and therefore is original an interesting.

As I explained in my review of the iPad game, the reality is that the game is nowhere near as original as it likes to think it is. Take a tower defence game, and make the enemies stationary and the towers moving, and you’ve got Warzone Earth. That’s not really original, it’s the same game just flipped 180 degrees.

The Xbox version of the game doesn’t do anything to change my opinion in that regard: this is a standard tower defence game through and through. But (and it’s a big but) this game is far more enjoyable than the iPad game. And the reason for that is simple: in this game you have direct control over the unit commander. 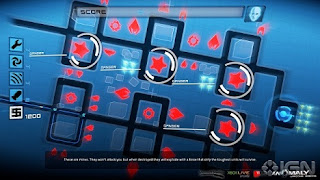 Let me explain: in the iPad version of the game, the controls were (as you’d expect for an iPad game) touch-based. Tap a virtual button to bring up control options, tap another virtual button to activate one of the game’s special abilities. Pick up powerups by tapping on them. With the iPad game you’re the hand of God and it’s a distancing effect that jars a bit with the action unfurling beneath. That’s not to suggest that touch controls don’t work – they do, but in Anomaly’s case the intensity just wasn’t there.

With the Xbox version of the game, you’re in control of an infantryman “commander” instead. This little fellow is halfway between a real character and a PC-style cursor – he moves around like a really fast person (far faster than the tanks and APCs that constitute your force) and is pretty magical in the sense that trees and other debris don’t block him. Buildings do, but otherwise he moves around the field just like a cursor. 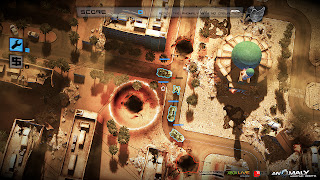 That little commander is responsible for picking up powerups and deploying them to help out the units, and while it might sound like a small deal, it ups the intensity of the game substantially. Do you leave your units alone and relatively helpless while the commander runs off to pick up a powerup, or do you risk being under resourced? As the difficulty of the game picks up, striking that balance requires some quick thinking and careful strategising.

But more importantly the change, as small as it might sound, does make the game more engaging by putting players into the action in a more immediate fashion. The result is a game that is easier to care about. And when you care, you’re more likely to play it through to its conclusion.

It’s also worth noting that this is a good looking game, and the impact is bigger on a nice big TV than a relatively small iPad screen. The war theme carries through better with some force feedback through a good speaker system too.

So, while there’s little real difference in terms of how the game plays and what makes up Anomaly Warzone Earth, it’s a better game on the Xbox thanks to a few small changes. Those little things can make big differences and really, this is quite a lot of fun.