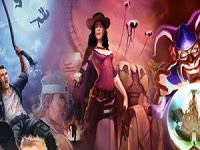 And in a bit more Paradox Interactive news, it looks like we’ve also going a RTS to look forward to this year.

RED Frontier is pinning itself as a “struggle for resources,” featuring robots and aliens. Pretty clichéd, but hey, the trailer shows a game that looks fun anyway.

GDC has been a good one for Paradox announcements. This really is a publisher to watch, because it’s proving itself more and more capable in appealing to the mass market, as well as the hardcore wargamers.